Choose Your Own Adventure: Frank Thomas vs. Kenny Williams

Share All sharing options for: Choose Your Own Adventure: Frank Thomas vs. Kenny Williams 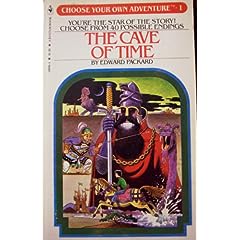 You lost your flashlight.
Turn to page 37.
I was going to sit down last night and try to predict the morning columns by the area columnists and the inevitable response from Frank Thomas. If you don't know what I'm talking about by now, you were probably stuck in The Cave of Time

Anyway, here's how I expect it to play out. In the next news cycle, Frank Thomas will choose to take the not-quite-the-high-road. He'll say something like "I wouldn't have expected anything different from Kenny Williams." That will be his only quote for the day, but he's saving up his reserves for another verbal battle.

In the news cycle following that, Williams will take a baby step backwards. He'll say that he doesn't regret anything he said, only the manner in which he said it; that the tone of his comments weren't commensurate with the office he holds.

From there, the whole story will boil over until their first face-to-face meeting, which will be more entertaining than a Harrelson-Marriotti wedding.

One thing that I found interesting in all of this was the style of interview conducted by Phil Arvia. It's not abnormal for a player to sit down for a one-on-one interview with a reporter, but it is rare that the reporter prints everything verbatim, including his own questions and comments, in the subsequent article. It was almost as if Arvia knew that if he printed Thomas' quotes without the context, Thomas would have just pouted and claimed his words were manipulated.

Another theory could be that Thomas only granted the interview on the condition that Arvia ran the story like he did. Thomas wanted to make sure he got everything he wanted into the paper and on the White Sox front door step.

The most interesting view point on the whole situation surprisingly came from Buster Olney this morning on Mike & Mike in the Morning. He theorized that Kenny's response was orchestrated from the highest levels of the White Sox franchise (Reinsdorf). He noted Ozzie's strange silence, almost as if Reinsdorf had given Kenny the 'all clear' to fire at will. -- Olney also defended Williams in his blog.

This whole situation reminds me of growing up as the oldest of three children. One of my younger siblings would do the I'm not touching you thing, which consisted of getting as close as possible to touching me while repeating "I'm not touching you" ad nauseum. I would have just enough self control to deal with the 'not-touching' with some restraint, so they would finally slip up and... touch. Which would, of course, send me over the edge, usually settling our little spat with punches.

They would cry, and get the attention they wanted. I would be admonished for my behavior. And after it all, nobody felt particularly good about what we had just done.

Joe Cowley has a timeline of Frank not-touching Kenny and the Sox all off-season, before finally 'taking the high road.'