Why the White Sox Will Beat the Rays

Share All sharing options for: Why the White Sox Will Beat the Rays

The following piece was commissioned--well, commissioned would imply that money had changed hands, so that's not the right word--by The Hardball Times. They wanted the story crafted around the title "Why [insert team here] Will Beat [insert second team here]," but didn't seem to like my Why the Twins Will Beat the White Sox entry. So I threw a little something together to placate those slave drivers.

While everything I've written in the following piece is true. I've left some of those pesky facts out; like the Sox lack of speed, or their record when they fail to hit a HR, or their road record, or their record in domes. You know, facts.

I know how dangerous, and out of character, it is for me to express optimism here. So, I'm issuing this preface. This is made-to-order optimism, which doesn't count nearly as much a real optimism. Similarly, it doesn't have the jinx-ability, to make up a word, of real optimism. So we're safe. The Twins will totally take care of these upstart Rays.

I had intended to write a separate preview-type post specifically for you guys, but there just aren't enough hours in the day. So read below, or head over to THT and check out the same thing under a different name.

The White Sox aren't supposed to be here. The AL Central was supposed to be a battle between the Tigers and Indians. But here we are; the Tigers offense didn't come close to approaching 1000 runs and the Indians received almost zero production from two of their top offensive threats before trading away their best pitcher, leaving the Twins and White Sox to battle it out for the division.

While the prevailing narrative seemed to be that nobody wanted to take control of the Central as both the Sox and Twins faltered in September, the reality is that the White Sox have been in control since May 15th. For it was on that date that two important events occurred. First, Juan Uribe, who opened the season as the team's starting second baseman, went down with a leg injury. All his replacement (Alexei Ramirez) has done is hit .304/.331/.502 since, including the go-ahead grand slam in game 162, inserting himself into the middle of the AL Rookie discussion. Second, that was the last day the White Sox were as much a one game behind in the division. True, they didn't hold on to first place for every remaining day on the schedule, and had to go all the way to game 163 to decide the division, but they never trailed by more than a half-game.

If the baseball season is a marathon, the White Sox were the team with the world class kick. Well, maybe not world class, but strong enough to outkick their competition. They set the pace all season, and saved just enough to outlast a scrappy Twins squad that nipped at their heels for the entire second half. And they've got enough left in the tank for a post-season sprint.

They've been there before

The Sox have seen some considerable roster churn since their 2005 World Series title, but their core remains. That squad was anchored by Paul Konerko and Jermaine Dye offensively, with AJ Pierzynski making the calls behind the plate and Bobby Jenks closing games out. Mark Buehrle is the only starting pitcher returning from that team, but... 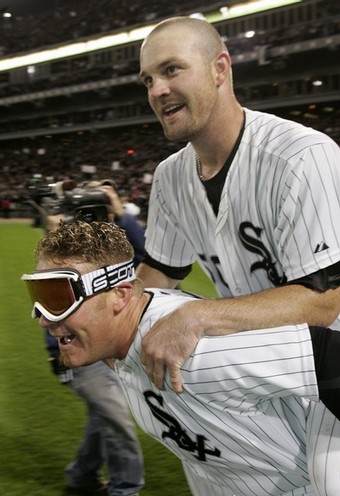 John Danks and Gavin Floyd were question marks coming into the season, but they're playoff veterans now. Floyd has pitched two of his best games in the twilight of the season, with an impressive performance in Yankee Stadium and an amazing start on short rest in what amounted to an elimination game Monday. Floyd mixed his pitches well, and when Detroit started to sit on his fastball, he scrapped it altogether, using a variety of breaking balls to record his final 6 outs.

Danks, who is only 23, has been protected from a high workload by the White Sox. When the Jose Contreras injury left them without a true 5th starter and forced them into essentially a 4-man rotation, the Sox did everything in their power to make sure that Danks was not used on short rest. And when they were finally left with no other option in game 163, Danks turned in the best start of his young career in the most pressure-packed game you can have outside the playoffs.

The Sox choked. There's no other way to explain their 5-game losing streak in the final week of the season. To revisit the running analogy, they stumbled, falling flat on their face in the final 200 meters of the marathon, before getting back to their feet and sprinting back to the lead in a photo finish. They've already stared elimination in the face.

The Sox were a team falling apart as late as the final Saturday of the regular season. Javier Vazquez got into a mound argument with Pierzynski after he gave up a 3-run double. Orlando Cabrera was calling out his teammates. Ozzie Guillen was calling out Vazquez and Cabrera. Nick Swisher, who has never met a microphone he didn't like, was suddenly not talking to the media following his late-September benching.

Then they won the final 3 games. Pierzynski hugged Vazquez, who will pitch game 1 based on availability more than merit. Cabrera gushed about the heart of his teammates. And Swisher was friends with the media again. Winning cures all. Winning after the season seemed lost gives the Sox a Nothing To Lose mentality heading into the playoffs.

They've got a pair of ringless HOF-bound players

Jim Thome and Ken Griffey Jr. have combined for 1152 home runs, including the game 163 game-winner, and have played a combined 4751 major league games (including playoffs), but neither have a World Series title on their resume. There has never been a 600 HR club hitter and a 500 HR club hitter in the same lineup prior to this White Sox team, and there may never be two players on the same club who've combined for such impressive individual records, yet lack the ultimate team crown, ever again.

Thome and Junior looked like little kids dancing on the field Tuesday night. While there is no way to quantify this, there's nobody in baseball that wants to get to that point again, this time celebrating a World Series win, more than these two. Give an edge to the Sox on intangibles.

They've turned up the heat in the pen

Bobby Jenks has transformed from a fireballing fastball-curveball strikeout artist in his first two seasons to a strike-throwing groundball machine with a complete arsenal of pitches in his last two. Jenks all but ditched his curveball this season, and when he did throw it, it wasn't the fall-off-the-table hammer that Jenks rode to dominance in the 2005 postseason. Jenks has always maintained that he could reach 100 again "if he needed it," which was widely used as a punchline by many a White Sox fan.

Jenks may have the last laugh though. He opened the season throwing in the low-to-mid 90's on the radar gun, and sat at about 94-95 MPH for much of the season. But in the last few weeks Jenks fastball has begun to show some signs of renewed life. He averaged about 95-96 in his last few outings before unleashing some serious heat in the play-in game against the Twins when his fastball averaged 98.1 MPH and topped out at 99.7 according to gameday.

Jenks isn't the only member of the Sox with some renewed life in his arm. Scott Linebrink's trip to the DL in late July sent the White Sox pen into a tailspin, and he didn't exactly help when he finally returned at the beginning of September. But in his final outing he averaged 93 MPH on the gun, up from 90-91 in his previous post-DL outings, and showcased a hard breaking curveball that hadn't been seen since June. It was only one outing, but it was the first glimpse the Sox have had of the Linebrink who allowed only 5 earned runs over his first 37 appearances.

Also bringing the heat in the pen are Matt Thornton, the hardest throwing lefthander in baseball, and Octavio Dotel, who is a walking definition of streaky. Thankfully for the White Sox, he closed the season on a hot streak, retiring the last 15 batters he's faced, 8 of which by strikeout.

The Sox bullpen was terrible in the second half, but these 4 guys might be putting it all back together at the right time to give the Sox a shot at a postseason run.

They've got power at every position

Postseason baseball is said to be about pitching and defense. You'll get no argument from me there. I've already touched on the Sox pitching. Defensively, the Sox are challenged, especially in the outfield and holding runners. But what the Sox lack in outfield defense, they make up for with the longball.

It seems that power is written off by many once the postseason rolls around. This strikes me as odd, because if the game is going to be low-scoring, decided by pitching, doesn't that amplify the impact of the home run? Well the Sox are the most powerful team in baseball. They live and die by the HR, and more often than not, they've lived this season. As they showed in the play-in game, dominant pitching plus one swing of the bat can be a winning formula in a playoff atmosphere.

They're the Rays' equal

Even thought the Rays compiled the best record in the AL, the last time they faced the White Sox, I noted how evenly matched the two clubs were. Looking back on that entry, I should have seen the injury comparison as a sign. Carlos Quentin, the Sox LF MVP candidate, would only last another week. The Sox haven't announced their playoff roster, but it's a pretty good bet that Quentin will not make the cut. He's begun to take swings, however, and could be back for the ALCS, but that's for another preview.

The Sox have actually outscored the Rays 37-35, despite losing 6 of their 10 meetings this season. The first three meetings of the year were blowouts, but the remaining 7 were some of the Sox hardest fought games of the year. 3 of the games ended in walk-offs, and 5 were decided by the bullpens. In fact, if not for a Sox bullpen that could be described as incredibly unlucky and an offense that completely shut down with 2 outs and runners in scoring position, the Sox might have come out on top in 7 or more of their contests with the Rays.

No team can match the White Sox combination of power, pitching and experience. Certainly not the Rays. White Sox in 5