The Free Agent Market: Second Base

Share All sharing options for: The Free Agent Market: Second Base

'Tis an interesting situation for the Sox, as they may be most able to secure this position in house.  Chris Getz is well known to SSSers at this point, or at least enough to become the end game for a season-long bet.  Nonetheless, it's worth it to point out at minimum what it appears he can and cannot do.  His career line, a gritty 286/.361/.381, suggests he slides into second head first and loves the taste of dirt.  He can hit line drives, steal the occasional base and is in general "fundamentally sound."  I have the impression that he can play second fairly well.  He played for Rich Maloney at Michigan and I've seen them play.  He stresses defense; getting groundballs from his pitchers and fielding groundballs efficiently.  Which is pretty astute really.  Michigan in the spring is not conducive to a lot of balls in the air.  Anyway, let's look at this: 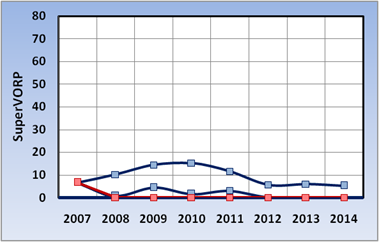 Obviously not a lot of upside there, but it looks like Getz is getting the most out of it and will probably be above replacement level at 2B for a couple years.  He'll basically be our version of Ryan Theriot or Mike Fontenot.  If he hits enough line drives, he'll be able to get some walks and be pretty valuable.  If he can't, we're going to have a tough time at second base.

On that note, I really want to advocate resigning Juan Uribe (and when it comes up: his blonder honey lovin twin in the OF) if at all possible.  Being able to play above average defense across three positions and adding pop makes for a decent safety net for the hardest positions on the infield.  And it isn't hard at all to envision Uribe outplaying Getz.  I think avoiding total suck at any one position all year (well, maybe not at 1B...) was part of what kept the '08 Sox afloat and I think it does so for most good teams.  Avoid below replacement play.  That makes sense.

Even if we let go of Uribe, there is a strong possibility that Getz will be pretty decent so in order for Kenny to buy here, we need to be getting a definitive improvement over the likely 5-15 VORP Getz (or a Getz/Uribe platoon) will provide.  Further, Gordon Beckham has an ETA of 2010, at which point he and Alexei would likely be the double play combo.  There is the possibility that Alexei moves to center, Beckham to short.  That would free up second base for a longer term contract, but I don't think that makes a whole lot of sense.  You don't want to block a cheaper and potentially superior alternative for the sake of having 2009 certainty.

This set of circumstances would seem to point in a pretty obvious direction.

For starters, there are a number of established keystoners who have Getz's skillset, like Mark Grudzielanek, Jamey Carroll and Mark Loretta.  For a couple million, they offer more certainty that you'll get what you'll probably get from Getz.  And I honestly expect that Getz would be more likely to give the better defensive performance considering the age gap.

Then there's Orlando Hudson who, coming off a .300/.367/.450 campaign, is looking to get paid.  Maybe Kenny is as into Hudson as Joe Cowley, but I don't see how it makes a whole lot of sense given the existence of Alexei, Beckham and Getz.  Especially since Hudson's numbers come wrapped in caution tape.  He's done his work in the least division in the lesser league in a ballpark that greatly inflates offense. 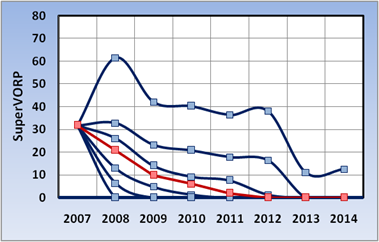 There's some serious age gravity at work here.  Hudson is going to be fighting his years from here on out and I don't really think anyone sees him taking the Hall of Very Good Path his 90th percentile tracks.  If you don't buy his upside, then making him a long term centerpiece for your franchise doesn't make a ton of sense.  Because then odds are decent that Chris Getz and Orlando Hudson are functionally equivalent.  Likewise is the case for Grim Reaper Discounts like Ray Durham and Jeff Kent.

So who's left?  Mark Ellis.  He's recently put to rest a terrible campaign that is pretty much totally encapsulated in the bizarre .186/.321 BABIP home/away split he posted this year.  He scratched out a .233/.321/.373 line in a year when he was playing for a new contract.  But there was basically no movement in his peripherals.  10.7% BB/PA to a career 8.9%, 14.7% K/PA to career 15.5% and a .140 ISO to a career .142.  I expect he'll bounce back pretty well, especially if given the chance to hit at US Cellular.  On top of that, his defense is well liked by UZR and should be an asset at second while Alexei mangles short.  Since you saw the other two, here's Ellis' graph: 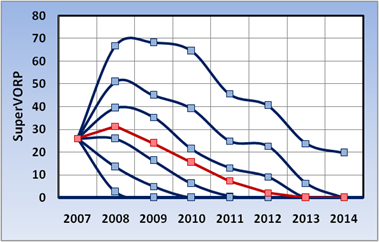 According to PECOTA, Ellis has pretty real upside if you buy that his true talent hasn't actually changed. In addition to a solid backup in Getz and Uribe to plug holes, that's a solid middle infield.  At present he's projected by that Tigers blog to be a B-level comp.  If he rebounds in '09, he should manage the same status again (I think.). I also like that he's right handed if he's replacing The OC in the lineup.  Losing Cabrera and picking up Ellis should be a net positive effect on the offense and could be a significant one, 20+ points of OBP and SLG.  Stick him in the Bat Handler spot after Swish and we might have some base runners for Q! to knock in next year.