It's easy for Sox fans to point to the Lance Broadway pick and mark the '05 draft as a failure, but a closer inspection reveals a number of players who could be classified as Top Prospects despite their lower-profile draft position. Unfortunately for the Sox, the '05 draft's Top Prospects now reside in other farm systems; Daniel Cortes (7th round) is the Royals top pitching prospect, with Chris Carter (15th) and Aaron Cunningham (6th) give the A's a couple extra Top 50 prospects via Arizona. But even with Broadway tucked away in the Suspects section of our classification system, we've still got a few names you'll recognize from the '05 draft here among the Plain Ol' Prospects.

Continue our look at the Sox prospects after the jump. 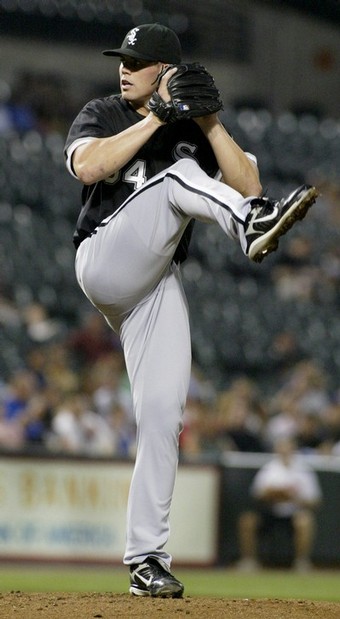 Clayton Richard -- Richard was an 8th round pick from the University of Michigan out of that '05 draft. He was a prized football recruit as a quarterback coming out of HS in Indiana, and spent more time at Michigan on the football sidelines holding a clipboard than he did on the mound striking out batters. For that reason, and an arm that supposedly reached up to 92-93 MPH in high school, I picked Richard as one of my breakout candidates prior to the '06 season. I was a little early.

Richard didn't give us much reason to think that he'd turn into a viable back of the rotation candidate during his first two seasons. His peripherals were unspectacular, striking out a little over 5 batters per 9 innings pitched. But this year, out of nowhere, Richard started pounding the strike zone and getting hitters to pound the ball into the ground. He walked only 20 batters in 130 minor league innings, and compiled a WHIP under 1 across two levels. But he still didn't miss enough bats to make the jump to a Top Prospect status.

Richard has a unique delivery and a big tail on his fastball, which he adds and subtracts off of for effect. His changeup is a also plus pitch, but he struggled to throw in in the bottom half of the zone at times at the big league level. His third pitch, a slider, will be a key to his long-term effectiveness at the big league level. I'd say that he could benefit from some more time in AAA (he only got 7 starts there before his call-up), but I don't know if he has anything more that he can learn down there. He may have to learn how to survive on the fly at the big league level. For his part, it seemed like he was doing just that down the stretch, as 3 of the 5 starts he received after he was recalled were considered Quality Starts, including a tremendous losing effort in Yankee Stadium, and two stellar relief outings in the post-season.

Richard will definitely be in the Sox plans next year, but he'll need to add in his secondary pitches to better neutralize right-handed hitters and keep hitters off balance the second and third time through the order. Working on the throw to first base would help too.

Brandon Allen -- If not for Clayton Richard's rise from borderline suspect to possible 5th starter, Allen's strong season would have been the most surprising in the Sox system. Allen has always had the tools to be a big time prospect, but he never demonstrated even the slightest bit of control over the strike zone above rookie ball. That all changed this year as Allen doubled his walk rate, the second straight season he accomplished that feat, and turned some of his '07 doubles (39) into home runs (29).

Many scouts still aren't sold on Allen, and truth be told, neither am I. They note his poor pitch recognition (though obviously it's improving) and defense as reasons to drag him down prospect lists such as this. He's more athletic than most guys his size, as evidenced by his double-digit stolen bases this season, but his fielding can be described as erratic. He still has work to do at the plate, and might be best served with a return trip to Birmingham out of spring. I'd like to have another half-season of data from him before I really speak passionately in one way or another about his prospect status. 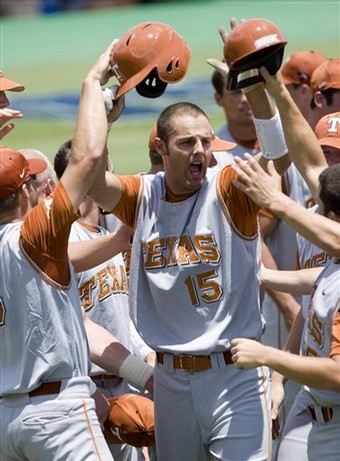 Jordan Danks -- It's a little bit hard to believe at this point, but three years ago scouts had Danks ranked similarly, and often times more positively, than Jay Bruce. Danks was viewed as a true 5-tool player who projected big power. But Bruce and Danks took separate paths; Danks to the University of Texas, where he never really showed the forecasted power even though he had the benefit of metal bats, and Bruce to the minor leagues, where he rose to become the #1 position prospect in all of baseball before making his major league debut before the mid-way point of the '08 season.

While most will point to Danks' lack of power, which, by the way, is completely overstated (36 of his 75 NCAA hits and 7 of his 13 pro hits in '08 went for extra bases), as the area that is holding him back from becoming a Top Prospect, I'd argue that it's his strikeout rate that most bears watching next year and in the future. Danks struck out 122 times in 588 collegiate at-bats. To put that in perspective, Josh Fields, who played in the same conference, albeit a few years earlier, struck out 113 times in 579 collegiate at-bats. That wouldn't be too troubling on it's own, because unlike Fields, Danks has always demonstrated a strong walk-rate. But Danks didn't improve his K or BB rates in any significant way in college, and 14 strike outs against 4 walks in 45 trips to the plate as a pro isn't a way to quiet those concerns.

Now that I've spent two paragraphs talking about what's holding Danks back, how about a little positivity. Well, Danks is still a legit 4-tool player, and could yet develop into a 5-tool player. (As I suggested above, those doubles and triples seem to indicate that the lack of power may have more to do with impatient scouts than anything else.) He's a tall, lanky, left-handed hitting speedster with a good batting eye, who plays a fine CF and has a plus arm. In short, Danks has upside above anyone else in the Sox system not named Beckham or Poreda.

John Shelby -- Shelby was my favorite pick from an '06 draft that makes '05 appear brilliant by comparison. The son of former major leaguer by the same name, Shelby was the lone prospect with any upside taken in the '06 draft. But critics noted his Swing At Everything style in college and questioned how that would translate in the minors. The answer, at least in the lower levels, is good enough.

Shelby has posted slugging percentages over .500 in each of the last two seasons, and demonstrated a combination of speed and power not seen in the White Sox organization since the departure of Chris Young. But all is not rosy for Shelby, starting at the All-Star break last season he all but stopped taking a walk. That might not be a big problem if he had outstanding contact skills, but he doesn't. He struck out nearly 5 times as often as he walked in '08, and his K-rate went up while his BB-rate went down compared to '07. So while it's nice that Shelby has posted consecutive seasons batting around .300 with good power, his peripherals suggest a swift decline at the higher levels.

Defensively, Shelby has been a vagabond. He started at second in college, and began his minor league career there, but has since moved to the outfield. I believe the Sox see him as a center fielder in the future, but injuries and questionable instincts limited his time there this year. 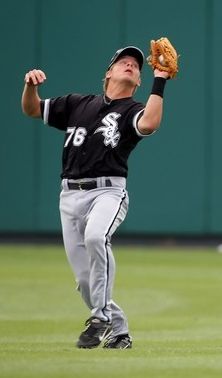 Chris Getz -- Chris Getz will hit. Maybe not for power, and maybe not right away; but eventually, Getz will become a high-average hitter at the major league level.

I can say that with confidence primarily because of how he controlled strike zone over his minor league career. He reminds me a bit of two young light-on-power second baseman we've seen come up in the last couple of years, Dustin Pedroia and Alexei Casilla, but in the form of a left-handed hitter. Making a comparison to player of Pedroia's caliber is always dangerous, but they're a similar type of player, though Getz will never be mentioned in MVP discussions. They take a walk and put the ball in play, and don't strike out much. Pedroia takes the not striking out part to a whole new level, which makes him far better than Casilla and Getz.

I bring up those two names not to get people excited about Getz' future, but to temper their immediate expectations for the beginning of the season. Pedroia was hitting well under .200 after his first month in '07, and Casilla hit just .222/.256/.259 in his 189 at-bats last year. For some reason, these Put It In Play With Little Power type hitters seem to struggle in their first exposure to major league pitching, even though the approach yields fine results over the long-term.

A look inside Getz' AAA numbers this season shows some troubling home/road splits. All of his career high 11 home runs came inside the small ball park at Charlotte, and he entered the '08 season with just 6 homers in his minor league career. He didn't show any platoon split in the minors, but it wouldn't be a bad idea to keep Juan Uribe around just in case he has trouble with major league lefties, or gets off to a slow start, or struggles defensively.

Getz was a teammate of Richard's at Michigan, and was taken 4 rounds ahead of him in the '05 draft. It was actually the second time the Sox had drafted Getz; he signed with Wake Forest out of high school before transferring to Michigan and being redrafted by the Sox.

Jack Egbert -- In truth, Egbert does not belong in this category. He did last year based on the inhuman HR suppression skills he demonstrated over two seasons, but he got touched up a bit in Charlotte's small ball park this season. Perhaps it was just the small dimensions (345' in the power alleys), perhaps it was some lingering elbow soreness that delayed the start of his season. Whatever it was, it's clear that Egbert fell down the Sox depth charts. As they desperately searched for competent bullpen help and a 5th starter, Egbert remained in Charlotte while Lance Broadway, Ehren Wasserman, and Horacio Ramirez helped the Sox put together the worst bullpen in baseball over the season's final two months.

Personally, I still believe that Egbert can (and will) be a successful major league pitcher. True, his stuff is nothing to write home about. But, he's got that funky hitch in his delivery, has a good changeup, and only one of his HR allowed came away from the castle. If he's still with the Sox in '09, I'd expect to see him improve on his '08 numbers in Charlotte, and move him back into the Why Hasn't This Guy Gotten A Shot? category.

Unfortunately for the Sox, a prospect like Egbert has little-to-no value on the trade market until he is able to prove himself against major league competition. And the only way to do that is by finally getting a legit shot. Egbert seems a bit like a guy the San Diego Padres might like; Kevin Towers because he fits into his mode for building a bullpen, and Paul DePodesta because of his good-to-excellent peripherals over the last three seasons. Otherwise, it's an extremely limited trade market for Egbert, with only a low-budget team like the Nationals figuring to even give him a second look.

I spent much of this post talking about peripherals and K/BB ratios because, aside from age and strong scouting report, it's the best indicator of future major league success or failure.