The Free Agent Market: Third Base

Share All sharing options for: The Free Agent Market: Third Base

The conversation we're about to have is one we didn't expect to have going into this winter's free agency.  Josh Fields was supposed to be the Southsider's Choice Brew when it came to making potfuls at the hot corner in 2008 let alone the subsequent year.  Lest we forget, Cheat went to town on Kenny for not ditching Crede for Fields and rightly so.  Crede played about half a season and in between airmailing throws to first put up a .248/.314/.460 line.  Chicago 3rd basemen as a whole managed a .266/.324/.444 line and this obviously represents a critical lack of production for the team going into 2009.  So Fields is put on the spot here.  How well can he do?

Sadly, it doesn't look that great.  Josh hit .246/.341/.431 in Charlotte, which translates to a .227/.319/.410 major league equivalent line according to Clay Davenport on the season.  This was an injury-laden season for Fields, which brings up further concerns that he may not be durable enough to handle a full MLB season.  If you view this season as the baseline for as bad as Fields can be, it's a little more encouraging.  For starters, that equivalent line STILL beat out Crede in OBP.  And Fields' power should return fully if 2008 was just one of those things.  The community projection expected a .258/.330/.490.  That's probably closer to his 75th percentile at this point, as this past year eroded some of the faith in his abilities I had and it did nothing to fix the concerns about his ability to hit a major league fastball.  So let's check out some charts and graphs and such. 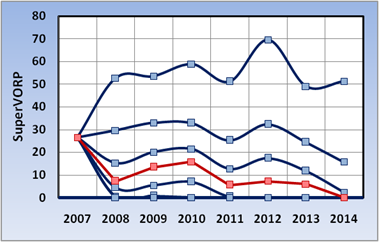 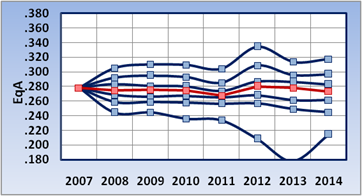 The graphs suggest that whatever level of production he managed in 2008 would be more or less the one he'd be at from '09 - '12.  There's still a good deal of upside to be had here also, so it doesn't look like writing him off is an altogether good idea, but between his poor defense and the obvious hole in his swing I wouldn't blame Kenny for doing so.  In any case, it does look like Fields would be able to give us a 5 - 20 run bump on offense.  The problem is that he's capable of playing -20 runs below average in the field (for whatever reason his '07 season isn't in the UZR .xls file I dled from Tango, so I don't have a specific number), so if his bat can't play at a near average level, he's a millstone out there.  In other words, he loses a lot of value UNLESS he can play at the level we thought he could in '08.  Show of hands: how many still think he  can?

His known value, regardless of the above, lies in his lefty-mashing skills as a platooning 4C.  He CAN step into that role next year and likely succeed in my opinion.  So the question then revolves around whether the return in a trade would exceed the value of his known abilities (well, ability. anyway...).  My guess is he's still more valuable as a trading asset, particularly in combination with Allen or maybe Richard.  Is there an obvious signing out there that would make such a deal moot?

Crede is an obvious no-go and I didn't even know Koskie and Norton were still in baseball.  Considering the list on MLB4u, I guess I should feel lucky it was pared this far.  Ensberg is decrepit, Chipper and Blalock have decent options on teams that don't have great alternatives and are trying to compete.  That leaves Casey Blake and Joe Crede (theoretically) as the only real MLB 3B available on the market and only one that could really work for the Sox.

This will be the first time that Blake, 35, will be a free agent and as you might expect from a player at his age, PECOTA expects him to regress rapidly, with next year as basically his last productive season in the big leagues.  His performance this year suggests that you might be able to get two league average years out of him.  This side of the argument looks at the fact that he's had his most productive ABs after he turned 30 and says he's a late bloomer whom the gods will kneecap at a later date than you might otherwise expect.  This argument also includes that he played 152 games after receiving a green light from Will Carroll's Team Health Reports last spring.

In the very least, you've got a 3B for 2009 that won't be a sinkhole.  Solid bat, solid but uninspiring D; a fairly attractive short term option that will make sense depending on the cost.  3 years will be 1 year too many, so Kenny would have to be prepared to eat a year if he went that far.  Moreover, there's a serious lack of 3B out there and Ned Colletti no longer has Andy Laroche to decide between.  Having to outbid the Dodgers would be a pointless endeavor and with such a bare market, it's tough to see Blake being short on offers.  The real conclusion is that the market here is extremely thin and that a non-Fields solution to third is more likely to come via trade.