What can you say that hasn't already been said about Javier Vazquez? He is what he is; an average pitcher who can't stand the heat in the kitchen.

I'd be lying if I said I expected anything better than 4.1 innings and 6 runs allowed from Vazquez, but there was a small part of me that knows that Vazquez can be a dominating pitcher at times, as he was in the first 4 innings of his last outing, or all 7 innings of the outing prior to the worst 4 consecutive starts of his career*. I hoped he would pitch well, better than expected, but I wasn't counting on it.

For that reason, and that reason alone, I don't feel too bad about the loss today. I was looking at this game as one that the Sox would be stealing if they were able to come out on top. And for about 10 minutes there, I thought they just might have a shot. But Vazquez gave the Sox 3 runs (earned on a two-out, two on Dewayne Wise HR) right back in the bottom half of the third.

I know there was considerable chatter in the gamethreads about Ken Griffey Jr.'s defense on Akinori Iwamura's triple in that inning, but I don't know if anyone gets to that ball. Junior was playing a bit shallow, by design, because of the moving-in-the-box type hitter at the plate, and I'd have to think that were Brian Anderson in the game, he might have been in even more. Junior played the ball as well as he can play it, and didn't even come close to making a play on the ball that hit at the base of the CF wall. Watching the replays, I think that ball was hit too hard, on too much of a line, to expect anyone to make that play. And this is coming from somebody who is always looking to point out Junior's defensive shortcomings.

* I went searching for a comparable stretch of games in Vazquez' past, but all I could come up with was a series of 4 straight games in which he allowed 5 runs earlier this season. Not surprisingly, Vazquez has had the two worst stretches of his career in the last 4 months on the south side. 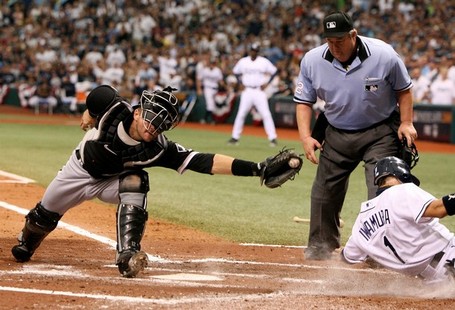 If there was one bright spot for the Sox in their opening game loss, it had to be the pitching of Clayton Richard. In hindsight, he might have been an inspired choice for game one starter. But that's a move that I was admittedly against until I saw him pitch today, so it would be hypocritical of me chastise the organization for not having the balls (or foresight) to make that decision. 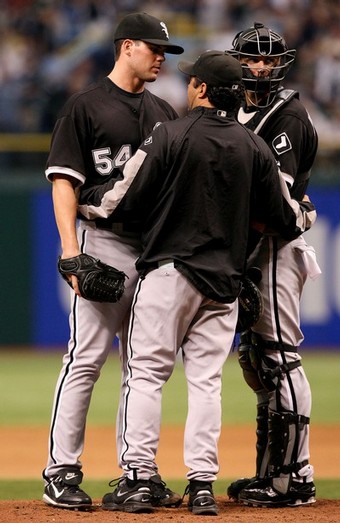 Unfortunately, Richard wasn't all that impressive out of the pen in relief of Vazquez late in the regular season. He was only alright, better than the other dreck littering the bullpen, which made the Sox decision an easy one. Vazquez would start game 1.

In the two biggest appearances of his career, his final start of the regular season in Yankee Stadium and the 3+ innings of playoff relief today, Richard has been very good. I suspect that the unusual left-handedness of those two clubs have something to do with his success, but Richard's two quality outings in high-stress situations for anyone, let alone a rookie who started the year in A-ball and outside the White Sox top 10 prospects, lie in stark contrast to the results of the $11+M proven veteran he relieved.

There were some ruffled feathers in the 7th inning, when Grant Balfour and Orlando Cabrera exchanged words following a ball well outside the strike zone on the first pitch of Cabrera's at-bat. It appears that Balfour, who relieved Shields with 1-out and the bases loaded*, got a little too excited for Cabrera's liking following a strikeout of Juan Uribe. Balfour said/yelled something, and Cabrera was not appreciative, kicking a cloud of dirt and chalk in Balfour's direction and, if my Associates Degree in lip reading is worth anyting, and it better be worth the 3 payments of $495 I paid, told Balfour "Fuck You!" Balfour responded by striking Cabrera out, and getting his Carlos Zambrano on as he left the field, almost having to be pushed into the dugout, as both managers found their way to the field.

* Great call by Maddon. Balfour is his best reliever, and arguably the nastiest reliever in baseball even though he essentially throws only one pitch. With Troy Percival being left off the playoff roster, most managers would probably have handed closer duties to Balfour without thinking twice. Balfour is exactly the type of pitcher you call upon in the 7th with the bases loaded, and Maddon's refusal to automatically stick the //obvious// choice into the closer's role allowed him to turn to Balfour in a much higher leverage situation.