Two Shortstops Pass in the Night

Share All sharing options for: Two Shortstops Pass in the Night

"White Sox fans are really gonna take to this guy."

That was Kenny Williams (roughly, from memory) during the spring of '04 sitting in with Hawk and DJ in the TV booth of a spring training game. The player to whom he was referring was Juan Uribe.

"As long as he stays back," Williams referring to Uribe's swing-at-everything approach, "he's gonna open some eyes." Just as KW finished that thought, Uribe sent a tape measure shot over the left-center field wall in Tucson Electric Park.

That's how White Sox fans were introduced to Juan Uribe. Expected by most only to be a platoon/utility guy, Uribe got off to a hot start and quickly cemented himself into a regular rotation in the Sox middle infield. By season's end with Uribe posting a .830 OPS and demonstrating plus defense at 3 defensive positions, it was clear that Uribe was the Sox shortstop of the future. 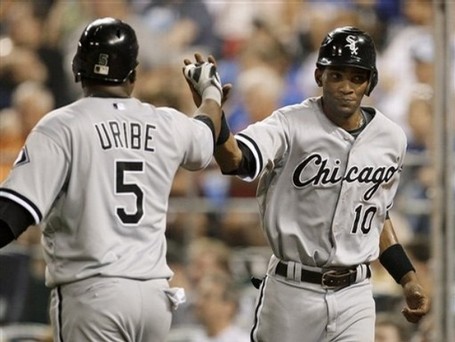 "Every time we play this kid at any position, he goes out there and looks better than what we thought."

That was Ozzie Guillen during spring of '08, impressed by Alexei Ramirez' ability to adapt quickly to each new situation he was handed.

Ramirez was the story of the '08 spring training. Can he play second? What about CF and SS? Can we get him enough at-bats? But unlike Uribe, he did not get off to a hot start. After starting the first two games of the season, a seemingly over-matched Ramirez was benched in favor of soon-to-be MVP candidate Carlos Quentin. But when opportunity knocked in the form of a Juan Uribe injury, Ramirez was ready, posting a .304/.331/.502 line over the rest of the season as he Wally Pipped Uribe.

It's now Ramirez who appears to be the White Sox' shortstop of the (immediate) future.

I make this comparison because it illustrates how quickly we can go from having our "shortstop of the future" to looking for the next one (I was going to post some pitch-type data from Uribe and Ramirez' first seasons on the south side here, but Ramirez' data disappeared from baseball-reference) and lends me to the question...

What becomes of Juan Uribe?

Uribe is a free agent this off-season, but has stated his desire to stay with the White Sox if all possible. He would seem to represent the Sox fall-back option, a safety net for Chris Getz and Josh Fields, if they're unable to upgrade their starters at 2nd or 3rd base.

Today's signing of Jayson Nix, who's far from someone who should be counted on even in a backup role, gives the Sox a bit more flexibility with their middle infield situation. Though I doubt anyone would be comfortable heading into the season with and infield comprised of Ramirez, Getz and Fields with only Nix around to provide backup. The Nix signing, along with all the praise that Chris Getz has received since September, should give some insight into the Sox intentions at second base. I doubt they'll be looking to add much there either through free agency or the trade market.

Uribe's return to the Sox would seem to be at least partially contingent on their plan at third base, and more importantly, on his willingness to accept a pay cut for the second straight season.

The Mariners fired scouting director Bob Fontaine, who previously held the title of Director of Player Personnel with the White Sox from '01 to '03. Given the recent turnover in the Sox' scouting department (thanks Dave!), his previous relationship with the Sox and Kenny Williams, and his respect throughout the industry, he would be a nice pickup for the Sox front office.