White Sox Season Ends (for reals this time) in ALDS

Share All sharing options for: White Sox Season Ends (for reals this time) in ALDS

The White Sox seemed to play their best baseball of the year with their proverbial backs to the wall. They had won 4-in-row (against 4 different teams) in elimination games, when a single loss meant the end of their long season. But winning their 5th elimination game in a row was too much to ask. 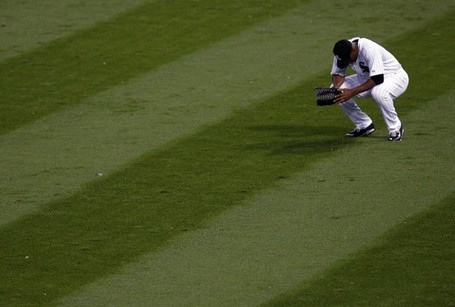 I wonder if any team has been able to stave off elimination 5 times in a season/postseason? I'm sure the there was at least one, I just don't know which teams were able to pull off such a feat.

Gavin Floyd gave up a pair of homeruns to the dead red sitting BJ Upton, and was pulled without retiring a batter in the 4th inning, as the Sox offense couldn't match the pace of their Rays counterparts. He probably threw better than Rays' game 2 starter Scott Kazmir, but unlike Kazmir, he had to face an offense that was not about to let a struggling pitcher off the hook. With his offense being Sonnanstine'd, Ozzie was forced to turn to the pen early. Despite another strong outing from Clayton Richard, the Sox could only manage a pair of solo-shots offensively, and got no closer than 3 runs the rest of the game.

We can admit now; now that the Sox are done for the season, now that the Rays have beaten them soundly 3-1. The Rays are a better team than the White Sox, or at least this version of the White Sox; the one without Q! and unable to properly set up their pitching rotation. In addition to their superior team speed, the one area where the Rays were clearly better than the Sox was in the back of their bullpen. And, at least for these 4 games, they pounded the ball out of the ballpark better than the Sox. The better team won.

These Sox weren't firing on all cylinders. The offense just hasn't been the same without our beloved Q!. The rotation was driven hard for 163 games, and strained through most of September with a 4-man rotation. The bullpen needed another week or two to get everyone back, healthy, and in their proper roles. And in the playoffs, anything less than your absolute best earns you a swift trip home.

So, today ends the White Sox' season, and I feel surprisingly good.

I once called the 2006 club a 90-Win Failure, but that term doesn't apply to this 90-win club. They exceeded all but the loftiest (and unrealistic) expectations, and found some youth around which to build along the way. To me, this season was nearly a complete success. BP agrees.

Those of you who stumbled onto the site this season will be surprised by how lively this site remains for much of the off-season (save early February, which is a baseball dead-zone). We'll be here to discuss possible free-agent pickups, trades, the prospects we don't have, roster contruction; I might even revisit those 4 elimination game wins, which I was too superstitious to properly recap, as any optimism on this site was met with a karmic slap in the face. So stick around, you might find the site is still a daily stop even when games have ceased.