Thanks for the Memory, Junior

Share All sharing options for: Thanks for the Memory, Junior

After saying goodbye to Orlando Cabrera, it seemed oddly appropriate to do the same, in abbreviated fashion, for the White Sox other high-profile hired gun, Ken Griffey Jr. After all, Junior was only around for a little over two months. Proportionally, he should get about one-third the coverage of Cabrera. 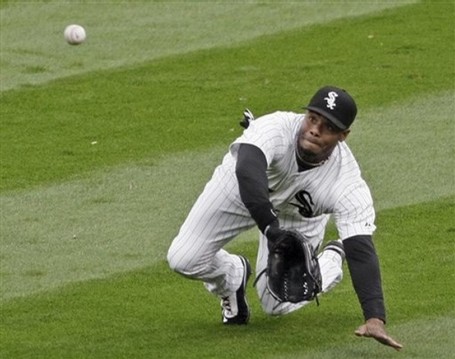 We were never fully on board with the Griffey acquisition, and saw Junior in a White Sox uniform was nothing more than a novelty. With any luck, Griffey might have been invigorated by his first playoff race since he left the AL. But the Sox were not so lucky. They got 35 games worth of singles-turned-triples in center field and 145 at-bats of Tony Graffanino at the plate. Not exactly the boost they were looking for. Though in the Sox defense, the only thing separating them from the Griffey of old was a time machine. So, they were close.

So, thank you, Junior. You're time in Chicago will never be forgotten.

Oh, and Brian Anderson would have caught that.

What are you reading?

Bloglines was a little bitch today, and I found myself way too far behind on my Perez Hilton reading. (I didn't even know Jamie Lynn was pregnant again until just a few minutes ago!) It's the second time in about a couple of weeks that Bloglines has spit the bit for an extended period of time, so I'm officially making the switch to Google Reader. I imported all my feeds to the Google back when they introduced Reader--which at the time was too slow for my liking--so a good bit of those feeds are now dead.

I'm taking this opportunity to prune my current list of feeds and solicit your advice for some new feeds. So what feeds, besides this one, obviously, are daily reads for you? Baseball, sports, humor, music, whatever. I don't care. If it's worth reading, let me know. Let your fellow SSSer know.