As a not-so-objective observer, it's hard to know what to say following the White Sox trade of Nick Swisher for Wilson Betemit! (exclamation point required for centerpiece of franchise-changing trade) and a pair of uninspiring minor league arms. Because, on balance, the Sox didn't get the best player in the deal, didn't get anyone with high upside in return, and didn't get much in the way of salary relief. 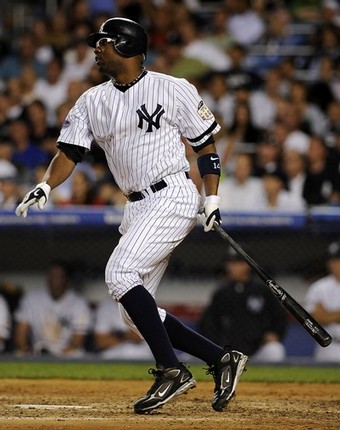 There are whispers that Swisher rubbed much of the coaching staff and some of his teammates the wrong way with his outspoken behavior, and, most of all, his pouting when his season turned south. Now that he's no longer a member of the organization, I'm sure there will be plenty of leaks about him being an uncoachable, hard-partying, distraction in the clubhouse.

And even if all of those things are true, this is still a bad trade. The Sox simply didn't get any value in return.

Let's use their acquisition of Javier Vazquez as an example. Vazquez demanded a trade, as was his right, putting the D'backs out over a barrel. They had to trade him, and other teams knew it. Yet the Sox were still willing to part with their most dynamic position prospect in the last decade along with a couple of valuable-yet-replaceable spare parts. Where is our Chris Young-like player in return? It's not like the Yankees are completely devoid of young, unproven, high-upside players on the farm.

It's not Jeff Marquez, the former supplemental first rounder is a combination of Lance Broadway and Jon Garland with some Nick Massett thrown in for good measure. His hit rate and strikeout rate as he progressed through the minors are not indicative of future major league success. But he's having a good run in the Arizona Fall League, so I'm sure we can just ignore the rest of his minor league numbers.

And Nunez isn't even worth discussing, because the Sox added essentially the same player in the deal, a AA reliever with good numbers. That seems like a one-for-one swap in itself.

By default, Betemit is the Sox haul for Swisher. And Gio Gonzalez. And Ryan Sweeney. And Fautino De Los Santos.

Betemit was a former top-prospect in the Atlanta system who has been varying degrees of suck since he left the peach state. He's been particularly terrible in the American League, posting a .286 OBP and an 89/12 K/BB ratio in a year and a half in the league. He's like Juan Uribe without the plus defense. Oh, and he'll be competing for a starting job at 3rd, and possibly second.

It's hard to believe this is the best the Sox could get in return for Swisher. And if this was the best they could get on the eve of free agency, shouldn't the GM stand pat until the landscape changes? There's just no way can I can look at this and call it a good trade.

11 months ago when the Sox first acquired Nick Swisher from the A's, I closed my trade recap with the following sentence.

Overall, the Sox are a better team than they were yesterday. But they're still an organization adrift in mediocrity with no concrete plan to once again reach the shore of excellence.

A year later, a division title later, and it's even harder to understand the direction the organization is taking with this move.