Another April, Another Disappointing Start

Share All sharing options for: Another April, Another Disappointing Start

When the White Sox opened last season with a series against the Indians, it quickly became apparent to me that they were vastly out-manned. And if they weren't out-manned (they most definitely were), at the very least, they were out-optimized. The '07 Indians knew exactly who was would play against righties, who would play against lefties, and who would enter in relief in the 7th, 8th, and 9th. To steal a tired campaign slogan, they were Ready From Day 1. 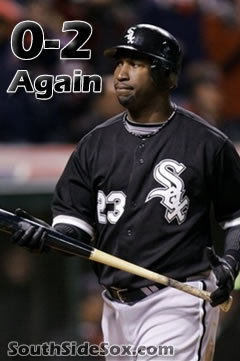 The Sox, by contrast, started three lefties at the top of the lineup and seemed unsure how to reconcile the issues which arose from those batters collective platoon splits. They had a bullpen full of high powered arms and hoped some of them would stake claim to high-leverage innings. Instead of a solid core and sound roster construction, they were counting on hope.

This season it appears to be more of the same for the two teams. The Indians might be the least changed team in baseball from '07. They know what they have, a very good team, and see no reason to change it. The Sox have changed, but not nearly enough, nor in the right spots.

As for the game itself, both Fausto Carmona and Javier Vazquez struggled with control early. Vazquez was the only one to pay the price, however, as the Indians worked up his pitch count and and scored 2 in the second after Vazquez loaded the bases without allowing a hit. Meanwhile the Sox let Carmona off the hook for his wildness by grounding into double plays at nearly every opportunity.

Carmona's sinker was obviously working on Wednesday. The Sox only hit 3 balls in the air, two of which fell for hits, off him in 7 innings. But with as wild as Carmona was in the early going, the Sox needed to capitalize with some runs.

Alexei Ramirez recorded his first major league hit off of mediocre, homer-prone reliever Jorge Julio. The broken bat hit, which is something I witnessed Ramirez do at least three times (including a double) during spring training, is part of the reason I have very low expectations for Ramirez right now. They only televised 13 of the Sox spring games, and I saw 3 broken bat hits for Ramirez. That tells me two things:

The good news is that the Sox won game three against the Indians last season, sending a lefty to the mound. The bad news is the Sox are counting on John Danks this season, compared to Mark Buehrle last year. And, according to our simulations, the direction of the Sox season is largely determined by these first two weeks.