Yes, that headline is definitely tounge-in-cheek. I thought it was funny that both Gonzo and Cowley posted about it the 5th inning at about the same time Pete and Option27 were sounding off in the gamethread. That was about the same time I was able to tune in (fast game), so I could just as easily be blamed for the jinx. 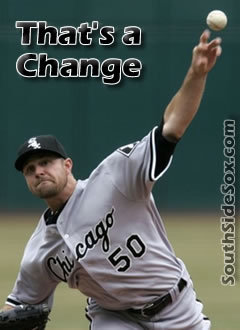 I think Danks GO/FO ratio of 12/6 would have been his best mark of all of last year, but the no-longer-available MLB.com 2007 gamelog and the differences between GB/FB and GO/FO make that difficult to say with absolute certainty. What we can say for sure is that, at least after one start, it appears that Danks has matured a little bit and his new cutter has allowed him to shift from being such a predominately flyball pitcher.

Allowing fewer flyballs will be key for Danks if he hopes to reduce his homerun rate (28 in 139 IP) from last season. As a general guide, about 11% of flyballs go over the fence. Danks HR/FB was 13.8% last year, allowing 28 HR in 203 flyballs. If he's able to increase his groundball rate, while simultaneously regressing to the more normal 11% HR/FB rate, he'll take a huge step forward to becoming an asset to the staff.

As an example of Danks homer-proneness, in his 26 starts last season, he had just one in which he pitched more than 6 innings and gave up 0 HR, as he did on Thursday.

In the field, Danks was helped by a good play from Nick Swisher catching a long drive as he smashed, almost Rowand-like (not enough broken bones), into the left center field wall on one of the two really well hit balls against him on the day. The other well hit ball flew just over the outstretched glove of Jermaine Dye -- that's two outstretched gloves of Dye vs. three Crede pops it up on the young year -- allowing Travis Hafner, who walked on 4 pitches (bad Danks), to score from first on Ryan Garko's double.

Later in the inning, Dye and Swisher would collide on a routine pop-up, which surprisingly yielded a disagreement in the Sox television booth. DJ thought it was Jermaine's ball, with Hawk arguing, correctly, that the center fielder is the field general, and if he calls you off you back off.

Ozzie made one of those moves that looks smart when it works, but could have lit up the phone lines had it backfired, bringing in Octavio Dotel to face Casey Blake, who took Dotel deep in Opening Day's pivotal at-bat. It was as if Guillen was saying to Dotel, 'I believe in you' as he made the call over Scott Linebrink, who was also working in the pen and worked a perfect eigth.

Offensively, the Sox still have me worried. Joe Crede and Juan Uribe provided all of the the offense on two solo homers. Carlos Quentin got his first start of the year, going 1-4, but grounding into a double play one batter after AJ Pierzynski's poorly executed sacrifice attempt.

I'll reserve railing on the offense for another day. For now, it just feels good to get that first win out of the way.