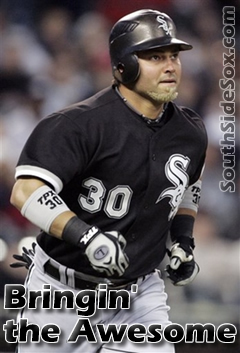 In other words, the Grinder Era is dead.

The Sox were far from perfect on Sunday night; Joe Crede reprised his spring training throwing woes, Orlando Cabrera bobbled a ball at short, Carlos Quentin dropped a routine flyball, Jim Thome failed to reach base. Yet they still found a way to blow the Tigers out.

With a little help from Carlos Guillen and the Detroit bullpen the offense took an otherwise close game and made it a laugher in relatively little time. With the Sox up 3-1 in the 6th, Guillen dropped an routine throw for what would have been out two. The Sox took advantage.

It's already shaping up to be a more fun season than last year.