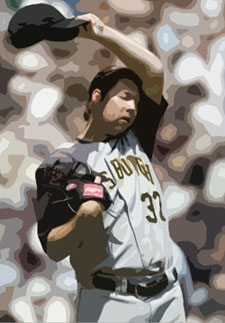 The Pirates found themselves up 6-0 after an inning and half Tuesday, and headed to the ninth down a touchdown. Kansas City may be the cure for what ails ya, but Pittsburgh is Chicago's bitch this season. The Pirates have allowed 127 runs in 15 games (3-12) against Chicago baseball teams this season. They've allowed 13 or more runs 4 times in those games.

I could write about what a great comeback the Sox put together Thursday, but I'm not convinced that they deserve the lion's share of the credit. Pittsburgh sucks, which is why I was talking about driving the bandwagon last week. [Note by The Cheat, 06/19/08 11:47 PM CDT ] I'm willing to rethink my position. I just saw a Fact Screen on ESPN's Baseball Tonight that said the 37 runs were the most runs the Sox have ever scored in a 3-game sweep.

10 days ago, I was talking about the incredible opportunity the Sox had to put the division away in June. The Sox have gone just 4-5 in the interim, averaging 2 runs a game before the gift that is the Pittsburgh pitching staff showed up on the south side. Their division lead has shrunk, not expanded, by two games.

The division which you guys rated the toughest in baseball (Twice) is decidedly mediocre, and looks like it will be a cripple fight into September.