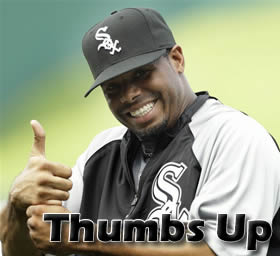 By all accounts, it was about as successful of a debut as Ken Griffey Jr. and the White Sox could have hoped for. Junior reached base 3 times, fielded only one lazy fly ball, and drove in each of the Sox first two runs, with each of those runs coming with 2-outs and a man in scoring position, a situation the Sox have particularly struggled with this season, hitting just .194/.305/.325 as a team.

With Javier Vazquez, a flyball pitcher, on the mound, and the spacious Kauffman Stadium outfield, it didn't appear to be a great situation for Griffey to make his return to everyday duties in center field. But luck, not to mention the wind, was on Griffey's side, as the only ball that came his way was a routine pop-up, which he fielded just as routinely.

Vazquez had his best outing in, well, I'd have to look it up. It's been a while. Yep, it was his best outing since May. He appeared to tire a bit in the late innings, as he struggled to limit damage in the 6th inning. Ozzie made the right move going to the pen to start the 7th, even though it started with a bit of mess.

Thankfully, Trey Hillman, who has done a number of questionable things against the Sox this season (though none that I can think of off the top of my head), kept the bunt on in a 3-2 count to give DJ Carrasco his first out of the inning. Juan Uribe would make a couple of nice plays to close out the inning, and the Sox escaped unscathed.

Uribe was in the middle of everything in the last few innings. He supplied a true 2-out hit in the Sox 3-run 6th, after Mark Grudzielanek gifted the Sox a pair to keep the inning alive, and added nice defensive plays in each of the last 3 innings.