Share All sharing options for: White Sox' Pitching Holds Indians Under a Dozen

The scoreboard in right field read KC - 6, MIN - 0. John Danks was pitching well enough, and the Sox clung to a slim 4-3 lead. The door was open for the Sox to step right back into control of the AL Central race. But a tough start to the 5th inning for John Danks, and a bullpen that refuses to provide any relief slammed the door shut. 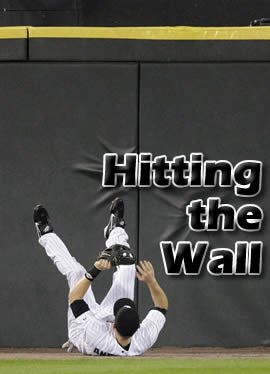 John Danks wasn't great Friday, but he wasn't nearly as bad as the box score makes him appear. His biggest crime was walking Ben Francisco in one of those How Was That A Walk at-bats immediately following a Don Cooper mound visit. Danks followed his no-out walk to load the bases with single to Shin-Soo Choo, finishing his night down 5-4.

Ozzie was forced to turn to the bullpen, which turned in a performance that would have to make even Jose Paniagua cringe. DJ Carrasco started the reliever roulette by throwing 5 straight pitches outside the strike zone to load the bases and put himself in a Here Comes A Grooved Fastball situation. Ryan Garko, homered off Danks in the 4th, welcomed Carrasco's center-cut fastball by sending it just over the outstretched glove of a wall-climbing Brian Anderson in center field.

Following the grand slam, Carrasco hit Franklin Gutierrez with a pitch. A clearly disgusted Guillen chased Carrasco from the mound and handed the ball to Mike MacDougal, of all people, in search of somebody, anybody, who could throw strikes and get a batter out. MacDougal promptly hit the first batter he saw, and fell behind the second 3-0.

Boos rained down from the crowd even before Carrasco allowed the grand slam, and though they had grown larger now that the Indians had sent 9 men to the plate and had yet to make an out, it was almost as if the sellout crowd was enjoying unloading their frustrations on the terrible display from the bullpen. Finally a strike. A huge Bronx cheer rolled through the crowd, thirsty for even the slightest display of competence.

MacDougal retired the next three batters in order to stop the bleeding, but walked the bases loaded in the next inning before being pulled. Ehren Wasserman added to the parade with a 4-pitch walk of his own to force in a run. And eventually Horacio Ramirez saw action, adding a run onto his historically bad record with the Sox.

It says a lot about the game as a whole that when I go searching for something nice to say, I turn to a couple good effort, close but no cigar plays by Nick Swisher and Brian Anderson attempting to bring back homerun balls.