The AL Central Belongs to the White Sox

Share All sharing options for: The AL Central Belongs to the White Sox

On May 16th, The White Sox won a game 2-0 in San Francisco. It was Alexei Ramirez' first game as a starting second baseman, and he provided the winning (and only) runs. The win that night put the Sox tied with the Twins, a half-game back of the Indians. The Sox, despite all their flaws, despite a serious September slide that featured a 5-game losing streak in the season's last week, have never looked back. 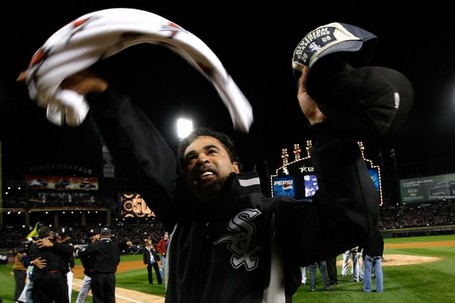 At no point after May 16th did the Sox find themselves any more than a half-game behind first. I'm sure this is where some wise guy is going to come in and provide a link to Baseball-Reference, or some other site, proving me wrong thanks to the retroactive application of the April 28th-August 25th loss to the Orioles. But that's not how it happened in real time. That's not how we lived it.

We lived in an AL Central that featured the Tigers stumbling out of the gate, a very good Cleveland team getting zero production from two of its top offensive threats (and shipping out their best pitcher), and a Twins team that could never seem to take advantage of the Sox obvious flaws. How many times did SportsCenter show a fact bar showing the Twins dismal record when they had a chance to move into first? It was a flawed division, ripe for the taking. And since you can't win the division by a half-game, it was the White Sox division.

It has been since May 16th.

Yes, Cleveland is a very good team. I stand by that statement. They could be scary good next year with a little more health, some luck, and a shrewd move or two. I'll have some more posts on the final three games up tonight and/or tomorrow sometime.