The only thing that fills Juan Uribe with more joy than a well-priced all-you-can-eat buffet is hitting homers (Profundo!) and dancing to some latin music in the clubhouse. He got to do a lot of the latter, and probably some of the former as well, on Friday Night against the Angels. It was latin night at the Cell, and an inspired Uribe hit two 2-run homers to help push the Sox to an early 7-0 lead. 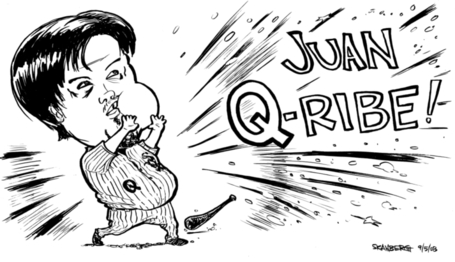 On the mound, Mark Buehrle struggled with the zone a bit early in the game, but still had good control of his stuff, specifically his breaking ball. He was chased with a smallish strike zone-influenced high pitch count after 6 scoreless innings. He only walked 2 and struck out 7, so it wasn't that he didn't have great control or the ability to put hitters away; it was just an atypical Buehrle start. We had early season John Danks back on the mound for a night.

As I'm sure you all know by now, Carlos Quentin has a broken wrist. He suffered the injury last Monday slamming a his fist into his bat after fouling off a Cliff Lee pitch. It's a move we've all seen him make dozens of times this season, and as such, I see no reason to get indignant. Not once before this afternoon did I see anyone complain about Quentin's bat antics.

As much as we all love Q!, his loss will almost certainly be overstated. It's an easy thing to do. He's unquestionably been the Sox most valuable player this season, yet he was not the player they could least afford to lose to injury. That title falls to AJ Pierzyski, who, while a far inferior hitter than Quentin, plays a premium position at which the Sox have a paucity of replacement options.

The loss of Quentin is softened by the questionable Ken Griffey Jr acquisition. At the time of the trade, the only value I could see in acquiring Griffey was to both insulate the Sox against injury to their old sluggers and lessen the likelihood of those injuries by giving them some extra days off in the final two months of the season.

I hope they got their rest. Because it's all hands on deck now. 22 games left. A 1.5 game lead. It's gonna take a 13-9 record, with one or two of those wins coming against the Twins to lock this thing up. And it doesn't matter how they get there.

Yes, Griffey should be in left field. Yes, he should be platooned with Brian Anderson, who would shift Swisher to LF. But, I'm not going to complain when neither of those things take place. I'm just going to sit back and enjoy--well, try to enjoy--a division race that nobody could have predicted at the beginning of the season.