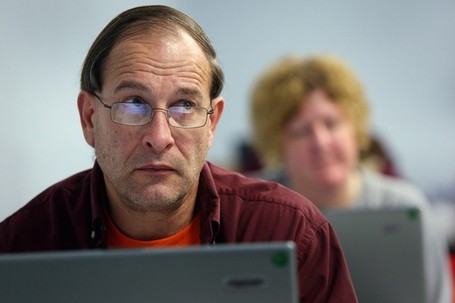 ALSIP -- A prominent member of one of the largest, most influential White Sox message boards demanded action in what has become a rather quiet off-season. WSChamps05, or Patrick Lemke as he is known IRL (in real life), was reported to have written a missive titled "This Off Season SUX" before it was eventually locked and deleted after the ensuing discussion devolved into a flamewar over which crappy outfielder was better suited to be the White Sox opening day center fielder, Jerry Owens or Brian Anderson.

A Google cache preserved most of WSChamps05's original entry, which began, "I'm tired of sitting here waiting for the White Sox 2 do sumthimg." The Sox have made a number of minor moves in the last month, but their last major newsmaker was the December 2nd trade of Javier Vazquez to the Braves for Brent Lillibridge, Tyler Flowers and two more low-level prospects.

"When are we gonna sign somebody? The Cubs signed Board Game. The Braves Signed Lowe, and STOLE Vazquez. even though he sux. The Yankees signed practically every1 else, but their's sitll plenty of good players left.

"We've got holes at 2B, 3B and CF. not to mention the rotation. Does any1 think Clayton Richard is better than Ben Sheets? What about Pedro Martinez? Jon Garland, remember him? Freddy Garcia too. Go get sum1 Kenny!!!"

When asked for comment, White Sox GM Kenny Williams did not return our calls.