WSChamps05 can rest easy tonight. The Sox have apparently made a free agent move, signing the oft-injured, and perpetually overweight Bartolo Colon to a contract of indeterminate value. 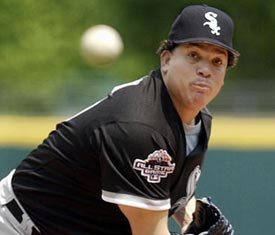 Sox fans should be very familiar with Colon, having watched him as a member of the Sox in '03, during which he posted a 3.87 ERA over a career-high 242 innings pitched. The Sox wanted to keep him around, offering him the longest, richest contract they had ever offered to a pitcher at that point. But they may have dodged a bullet, even though Colon would go on to win a(n undeserved) Cy Young award in '05, as Colon fell apart in his final two seasons in Anaheim. He has battled back issues over the past three years, logging just 195 innings since winning the Cy Young.

A year ago, after pitchers and catchers had already reported to camp, Impacto Deportivo reported the Sox to have signed Colon pending a physical. Ozzie Guillen had personally scouted Colon in winter ball, but the Sox denied the reports. A week or two later, Colon signed with Boston on a split contract which allowed for him to become a free agent once again if he wasn't in the Red Sox starting rotation by mid-May.

Colon's back problems returned when he swung a bat in his 6/16 start, where the velocity readings in the chart below are skewed as MLB Gameday classified all of his fastballs as changeups. He was placed on the 60-day DL, and made only one more start for the Sawks, leaving the team when they wanted to move him in the bullpen.

I haven't mentioned Colon in this space, but he was second (behind Pedro Martinez) on my own internal list of a low-salary, low-risk, high-reward type of pitchers available on the free agent market. I have mentioned a few times that the Sox were in need of someone to fill the '05 Orlando Hernandez role of old, good-when-healthy pitcher who can keep a spot in the rotation warm for the return of Jose Contreras or the eventual rise of Aaron Poreda.

Yes, Colon will most likely get injured in '09. But he's a far better pitcher (when healthy) than [Starter Candidate 5], and any move that pushes [Starter Candidate 5] farther down the depth chart is a good move in my book. I feel a lot more comfortable in the Sox rotation today than I did yesterday even though it still contains a few too many question marks for my liking and I'm not 100% confident in Colon himself.