Share All sharing options for: Low on Funds, White Sox Play the Lottery

Google News is filled with stories about lottery ticket sales, not because it's the start of a new year, a logical point to compare year-over-year numbers, but because of the flagging economy. Economic trend pieces, lottery or (ahem) otherwise, and commemorative Obama editions are just about the only things keeping newspapers afloat these days. So it should come as no surprise that we see our own White Sox economic piece just as the Sox seem to be trying to cash in on one (or more) lottery ticket signings of their own. 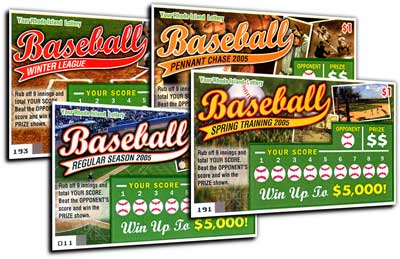 Yesterday, I was quite happy with the Bartolo Colon signing even in the absence of specifics. Today brings us the news that Colon's contract is non-guaranteed, with a base salary of $1M and maximum of an additional $2M in incentives. That's the type of contract that can only come out in the Sox favor; either Colon proves to be a major league pitcher (even if for a limited number of starts) and is "worth" more than the Sox are paying him, or Colon stinks and the Sox are out less than a million dollars.

Scott Gregor seems to believe that Kenny Williams' non-denial when asked about Freddy Garcia indicates the Sox don't intend to pin their hopes on just one lottery ticket.

As for Colon, Don Cooper, like us, alternates between too enthusiastic and reasonably guarded.

"Can we keep Bartolo healthy? That's going to be our major undertaking," Cooper said. "Right now, he's healthy and structurally sound. Kenny got us a guy who can help us win, a solid contributor in the fourth or fifth spot."

If there's any team in baseball who can keep Colon healthy and on the pitching mound, it's the White Sox. No team can come close to matching the 4 year run of health the Sox have had in their rotation under Ozzie Guillen and company. Part of that credit goes to the Sox excellent training staff, but a good bit of it goes to the Sox evaluation of those pitchers as well. And Williams seems to think the Sox have a good hold on what Colon brings to the table.

"Bartolo always has been of interest to us," Williams said, "and we know him to a greater degree than most clubs. The comfort level we have now is even greater than we had before."

Let's hope Colon is comfortable enough to show up to camp in shape, or at least ready to go by opening day.