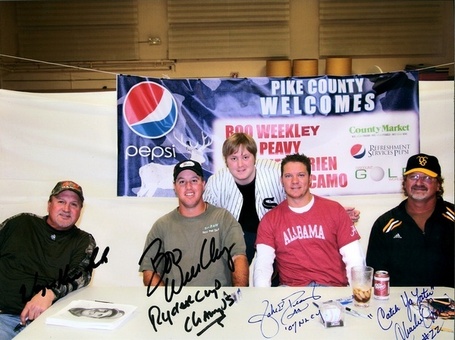 It's hunting season again in my small mid-western town, and around this time of the year we usually have several athletes who come to the area to hunt. Former major league catcher Charlie O'Brien usually organizes some kind of autograph session every year during this period as a fundraiser for local athletics. This year they had Wayne Krenchicki, Boo Weekley, Jake Peavy, and of course Charlie O'Brien. And since Peavy was traded to the White Sox this past season I was especially looking forward to meeting him and getting his autograph.

I threw on my Freddy Garcia jersey and headed over to the elementary school gymnasium where the event was taking place. I got in line and about half an hour later the guys showed up and sat down at the table they had set up. Jake was about 15 minutes late, and after he'd arrived they began signing and taking pictures. After a few minutes it was finally my turn and I made my way up to the table. I really didn't care about anyone else up there so I focused my attention on Jake. I had been to Spring Training back in March and I had a baseball with a bunch of signatures already on it, including Quentin, Danks, Beckham, and Flowers. So I brought that same baseball with me for Jake to sign. 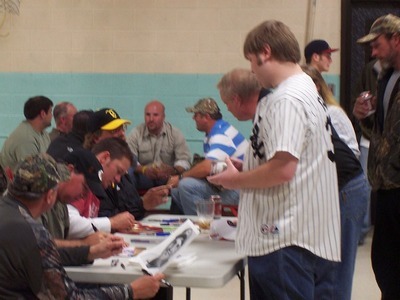 I handed the ball to him and said hello. I thanked him for accepting the trade to Chicago and told him that I was really looking forward to having him pitch for us. I asked how his ankle was feeling, and he told me that he was at 100% now. My friend Shawn asked how he was feeling about pitching at U.S. Cellular Field in comparison to PETCO Park, to which he replied, "Christ...I'm gonna have to keep the f*cking ball down." Mark Buehrle has a cabin and hunting land just across the river from here near Louisiana, MO, so I asked Jake if he knew that Mark hunts in the area as well. He said he was aware and that Mark's place is about 45 minutes away. I thanked him again and shook his hand before getting my picture taken with him and getting that autographed as well.

At this point I was pretty satisfied with the experience, so I dropped off my camera, baseball, and autographed picture at my house and headed uptown with a couple of my friends for a few beers. We're going from bar to bar kicking back a few brews at a time. Finally we head into a bar called "The Brickyard" and sitting there at a table with a couple other guys is Jake Peavy. I'm still wearing my Sox jersey at this point and I didn't want to come across as an annoying fan, so I didn't make a big deal out of it. I went up to the bar, got a Miller Lite, and sat at a booth on the other side of the room. Jake is drinking cocktails and doing shots, and occasionally people are coming up to him and talking to him for a bit. After a few beers I finally convince myself that I'll regret it if I don't at least try to talk to him a little. 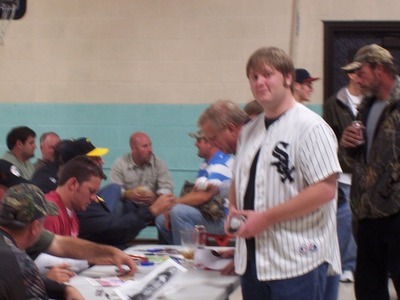 So I grab my beer and casually head over to his table. He looks up at me and we shake hands. I introduce myself again and I start having a very casual conversation with him. I ask where he's hunting at and if he's had any luck so far. Apparently he was doing quite well. At this point a Pizza Hut delivery guy shows up with four large pizzas and delivers them to Jake's table. All the people around him start digging in while Jake and I keep talking. He grabs a slice of pizza and is eating it off and on while we're talking. I ask him if he's all settled in with the rest of the team. He says that he is and that, "They're a good group of guys." I mention all of the rumors about him going to the Cubs and ask how he felt about eventually winding up with the team on the other side of town. He smiled, shook his head, and said, "I'd much rather play for a blue collar team like the Sox." (Inside I was doing a massive fist pump.) He added that he "wanted to go to a team where winning was the priority."

Once again, I told him that I was looking forward to having him at the top of our starting rotation and that our pitching was going to be really awesome. He nodded and said, "Not too many people around the league know about Danks and Floyd, but they're great." He took a quick drink, and without me bringing up anything about it said, "We're trying to get Adrian Gonzalez right now too." I was like..."Really? I heard about that, but didn't know if it was true." He nodded and took another drink. After that I told him that I didn't want to bother him too much, thanked him for the conversation, and went back to my booth. I had another beer and about 30 minutes later my friends and I decided to leave. On my way out I approached him again, shook his hand, and told him to have a good night. His final words to me were, "Hey man, it was a pleasure meeting you." 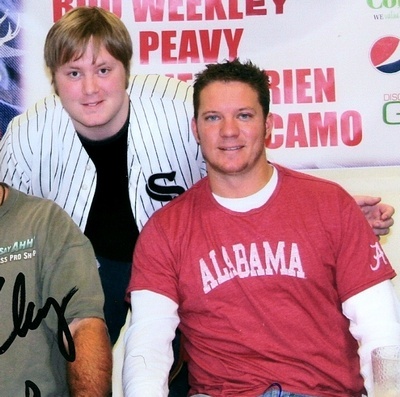 I'm sure there are some things about the meeting that I might be forgetting. I've tried to remember as much as I can, but I was also slightly buzzed at the time. If you have any questions on things we might've talked about go ahead and post them and I'll try to remember if they were discussed. I just thought you guys might enjoy my story. It was certainly a thrill for me and a really memorable night. Jake was a really nice and classy guy, and he seems to be genuinely looking forward to pitching for the White Sox.