Share All sharing options for: Masset Theory in Practice, 2009 Edition

For those unfamiliar with the Conservation of Masset Theory – or who don’t recall the specifics – the one sentence summary is "No matter how much Masset you use up, there is always more Masset in your system." So, replacement level, back of the bullpen arms are readily available in any organization. 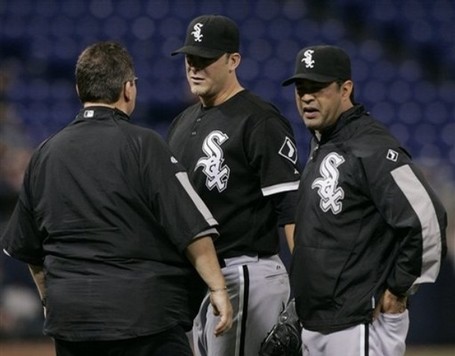 For the 2009 White Sox bullpen, there are four guys who are all but assured spots – Bobby Jenks, Matt Thornton, Scott Linebrink, and Octavio Dotel. Additionally, one of Aaron Poreda or Clayton Richard is likely to fill the second lefty role. DJ Carrasco and Adam Russell probably have the inside track on the last two spots in Ozzie Guillen’s probable seven man bullpen. Most White Sox fans know all of these guys pretty well – and the last three arguably have some Masset in them. But we also all know that we’re going to see some other guys in that bullpen, whether to start the season or replace someone due to injury or ineffectiveness. So let’s go over some of the Masset in the White Sox system that you may see this season.

Lance Broadway: There’s likely some familiarity with him. First round pick in 2005. Has made two winning starts in each of the last two seasons and each against the Royals. Despite this stellar track record as a starter, his future is likely in the bullpen as a mop-up/spot starter sort. In his repeat of AAA last season, he did improve his groundball and walk rates. However, these were counteracted by becoming far easier to hit – most alarmingly in his 1.5 per nine IP home run rate. While his curveball flashes as a plus pitch, this righty’s other offerings – 90 MPH fastball, 85 MPH cutter, and 80 MPH change – simply aren’t good enough to miss enough bats.

Kelvin Jimenez: This is some waiver wire Masset. Originally a Rangers signing out of the Dominican in 2000, this right-hander finally reached the majors as a Cardinal in 2007 and 2008 and posted some ugly numbers – 1.758 WHIP and 6.82 ERA. While he throws hard, this hasn’t translated into strikeouts at the major league level.

Ehren Wasserman: This side-arming righty had a promising major league debut in 2007, posting a 1.174 WHIP and regularly getting righties out. 2008, on the other hand, did not treat him so well. After losing out to the original Masset for a spot in the Opening Day bullpen, he proceeded to cut down AAA hitters in a repeat at that level while posting a tasty 3.2 K/BB rate. However, when called upon at the major league level, things didn’t go so well, posting 14 walks versus 9 strikeouts. It appears that major league hitters have seen the video of his funky delivery and are aware that his slurve isn’t going to be a strike and thus don’t swing at it.

Jon Link: Some traded for Masset – the fruit of the Rob Mackowiak trade. Spent 2008 as Birmingham’s closer and posted a sexy 10.6 per 9 IP strikeout rate to go along with a 57% groundball rate. He’s got a low/mid-90s fastball and his secondary offerings – a plus slider and an average change – make him profile as something more than Masset in 2010 and beyond. However, his 4.3 per 9 walk rate suggests a stint at Charlotte would do this righty some good and a MLB debut in 2009 could be a shaky proposition.

Carlos Torres: A 15th round pick in 2004, this righty was shifted to relief in 2007, had success at both high A and AA, and then was largely shifted back to starting in 2008 at Birmingham before ending the year at Charlotte mostly in relief. It is thus unclear what the long-term plan for Torres is. Has always posted good K rates, though his three pitches – fastball, slider and change – all grade as average.