We've taken a bit of a break from our community projection series as I hired on some new editors to a mid-4 figure sum using some Verizon Math. 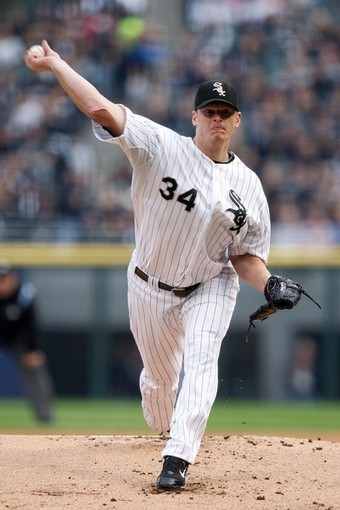 Part of the reason I started the community projections a few years ago, aside from trying to fill the dead period in February, was to harness the community's knowledge of things that projection systems don't know. We nailed Joe Crede's projection a few years ago because we believed he was a slightly different hitter after he hit the video booth when he broke his finger. And even though Gavin Floyd and John Danks beat our projections last year, we came far closer to their actual numbers than any of the computer-based systems.

There are times when human input can be invaluable in a projection. That's not to say I think that a large-scale wisdom of crowds style projection system, sort of like Tango does with his fielding project, would be more accurate than say PECOTA. Computers will continue to crank out the most reliable projections around. But on an individual, case-by-case basis there are gains to be made by applying a human element to a computer model. I believe Gavin Floyd is one such case.

Before we can dive into building our own educated guess of a projection, before we can answer the age old question Why does PECOTA hate White Sox pitching?, we need to understand the basics nuts and bolts of a simple projection system.

In their most basic form, Marcels for instance, projections are simply a weighted average of a player's past performance. They can get substantially more advanced than that, adding aging curves, influence from players with similar profiles, and other sabermetric principles (BABIP, FIP, etc.).

From a pitching standpoint, projection systems don't go straight from "A" (last year's performance) to "Z" (next year's projected ERA). There are stops in between, namely projecting the pitcher-controlled stats (K, BB, HR, HBP).

PECOTA doesn't hate the White Sox, or Gavin Floyd in particular. What projection systems really love in pitchers are guys who maintain good groundball rates (suppressing homeruns), high strikeout rates, and low walk rates. Aside from Jack Egbert, the White Sox simply don't have anyone who fits that bill, although John Danks is trying to make the jump.

Applying Our Knowledge to Floyd

Now that we (vaguely) know how projection systems arrive at their final destination, let's use our knowledge of Floyd, the post-Philly Floyd, to make a more educated projection of our own.

First, let's take a look at Floyd's 2008. As we all know, his first 9 starts yielded good results on the scoreboard, but his method (27BB/25K) wasn't one that was sustainable. Over his final 24 starts, however, his method (1 HR/G, K/BB ratio of about 3) was one that figured to produce major league success. It's a bit ironic that when Floyd started pitching like a major league pitcher he was less effective at preventing runs than over his first 9 starts. In fact, the 4.20 ERA over those 24 starts doesn't even accurately capture his run prevention, as he allowed a whopping 16 unearned runs over those starts to raise his RA to a not-so-pretty 5.17.

Some might look at those above stats and wonder what type of pitcher they have. I know if I hadn't watched the season myself, I wouldn't know what to make of those two radically different styles. The obvious way to answer such a question is to go back and look at his past performance.

In his stay at AAA in '07 Floyd posted a K/BB ratio of a little below 3 and a K/9 of 8.1. Those are numbers that figured to translate to moderate major league success. And we finally started to see some of that success over his final six major league starts (labeled September call-up), posting peripherals remarkably similar to those over his final 24 starts in '08.

If you look at the peripherals from all these columns there should be one set of numbers that sticks out. One of these things is not like the others. For the purposes of our projection, I'm all but eliminating Floyds first 8 starts form my mind. They happened, but they don't exactly carry the type of repeatable performance that will help us create an accurate projection.

Admittedly, I've left out Floyd's lackluster first 30+ major league innings with the Sox. I haven't forgotten them completely. But I was looking for his true talent, his revised true talent since he started looking reporters in the eyes and grew big hairy balls, and those early '07 major league stats represent too much of Philly Floyd for my liking.

So what is Floyd's true talent as it pertains to his rate stats (K/9, e.g.)? What can we expect from a Floyd who's a year wiser, who's more likely to pitch like his final 24 starts over an entire season?

I've got Floyd for a K/9 of about 7 (probably a hair higher than 7), a BB/9 under 3 and HR/9 of about 1.3. If I take those peripherals and plug them into a spreadsheet giving Gavin about 30 starts to get some counting stats, I come up with a FIP ERA of about 4.5.

FIP Fielding Independent Pitching, a measure of all those things for which a pitcher is specifically responsible. The formula is (HR*13+(BB+HBP-IBB)*3-K*2)/IP, plus a league-specific factor (usually around 3.2) to round out the number to an equivalent ERA number. FIP helps you understand how well a pitcher pitched, regardless of how well his fielders fielded. FIP was invented by Tangotiger.

Since our initial projection is admittedly optimistic, all but ignoring Floyd's first 9 starts of '08, let's create a more realistic projection as well. If we move his K/9 down to 6 and his BB/9 and HR/9 up to 3 and 1.4, respectively, his FIP ERA raises to 4.9. That's exactly his weighted mean PECOTA ERA, but still below the 5.11 ERA that ZiPS gives him.

While more data is almost always better than less data, Floyd's topsy-turvy first 60 innings in '08, his lackluster first 30 major league innings in '07, and to a lesser extent his time in Philly all drag Floyd's projected ERAs skyward. But is Floyd ever likely to repeat a stretch of baseball like his first 60 innings of '08? Should his time in Philly really have any substantial effect on his future projections?

Going through the basic step-by-step process has allowed us to see how these systems arrive at their ultimate destination, and perhaps how they can be thrown off course by some wonky data. It's easy for us to sit back and say PECOTA hates White Sox pitching, but until we dive headfirst into our own projection, until we apply our own weight to the stats as well as exterior factors, we're just offering up a knee jerk reaction.