Adam Eaton is not a good pitcher. There's no sugar coating it.

He entered Thursday's start with a total of just 8 innings pitched in two starts, allowing 17 hits and 10 runs in the process. Lest you think that is just some small sample size suckage, Eaton has shown remarkable consistency with WHIPs above 1.5 and ERA's over 5.00 in each of the last three seasons. He's been over 1.6 and near 6.00, respectively, in the last two seasons.

All of which is a roundabout way of saying the White Sox should have teed off against this scrub.

Needless to say, the Sox didn't tee off on Eaton. In fact, he dominated them.

After 7 innings I was beginning to think that Eaton might be pitching the best game of his career, so I headed to B-R's Play Index and looked up his best game scores. If Eaton had been pulled after the 7th, he would have left with a GameScore of 78, or the 3rd best outing of his career, his best outing since 2005.

I was begining to write a recap around that stat, so, of course, the Sox had to go an muck things up -- the second time this year they've killed a Play-Index-influenced recap with some meaningless late runs. The two 8th inning runs lowered Eaton's GameScore to 67, which still ranks in the top 25 starts of his career and top 5 in the last 4+ seasons (91 starts).

Even if Eaton wasn't carving up the Sox, they probably didn't have much of a shot thanks to Bartolo Colon. After his previous outing I wrote:

He's a one-pitch pitcher, with a minuscule room for error. But in his first two outings, his control has been impeccable. I don't think the Sox can count on him to have that kind of control every time he takes the mound...

Well Colon's control was far less than "impeccable" Thursday night. He had the same good movement on his fastball that he displayed in his first two starts, but he was letting that movement take the ball back over the heart of the plate instead of spotting it on the corners. The lopsided zone of Chuck Meriweather probably didn't help either. All told, Colon allowed 10 of the 19 batters he faced reach base.

If Colon is going to be successful, he's got to hit his spots with a marksman's precision; or add some velocity and some more pitches to his arsenal. Colon did add in some changeups and sliders today, 9 non-fastballs by my count, but changing between 81 and 87 MPH isn't exactly going to fool major league hitters. 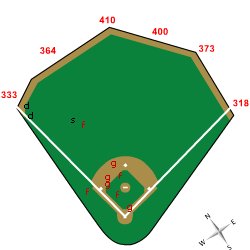 Joe Cowley speculates that Jayson Nix could replace Alexei Ramirez at SS. Now Alexei has been hitting terribly. He's swinging so early that he can't stay back on anything off-speed, and everything he puts in play is near the left field line.

In this series, he went 3-11 with 2 doubles, which usually isn't cause for concern. But if you look at his spray chart at right, if you watched all of his at-bats, you'd see how far out in front of everything he is.

Those two doubles in the left field corner were just barely fair, one a grounder just inside the 3B bag and the other a looping flyball off the end of the bat. The lone out he made to the right half of the field was a bunt attempt.

Alexei has appeared to be a positive asset in the field at shortstop, so there's no need to pull him in order to get an inexperienced bat (and glove) in the lineup. But it's time for Alexei to show us the ability to adjust on the fly for which he received so much praise last season.