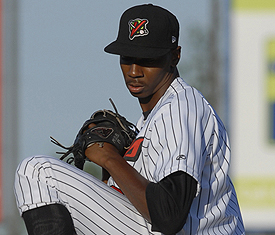 This time of year, there’s a lot of talk around the water cooler about where to go for a vacation during spring break or the summer. Should we set out for Fort Mill, South Carolina to experience the mill-fort? Visit Birmingham to see the world’s largest cast iron statue? Dash to the Camel City to introduce the children to the tobacco and doughnut industries?

Or head to lovely Kannapolis, North Carolina to visit the Curb Museum of Music and Motorsports?

I find such questions silly. While "culture" is nice, I – like the rest of the normal population – choose my vacation destination based upon the minor league baseball available. So let’s explore after the jump what each of the White Sox full season affiliates has to offer the minor league aficionada.

The Castle has long been barren of legitimate star power. Not since Joe Crede and Jon Garland passed through earlier this decade has this team seen real prospects. And this year, at least to start, appears to be no different.

Look at this roster. It’s awful. There isn’t a position player younger than 25. Heck, there are only a few pitchers who are. And, not coincidentally, those are some of the only guys to even be mildly interested in following. Their opening day starter was John van Benschoten. Think about that. Rounding out the rotation will likely be Lance Broadway, Wes Whisler, Jeff Marquez, and Carlos Torres. Fugly. The recent addition of Justin Cassel to the roster (although as an inactive) may mean that he will be in the rotation.The only position players to note are co-catchers Donny Lucy and Cole Armstrong (although Armstrong left today's game with an apparent leg injury, status uncertain). Jayson Nix, once he comes of the DL, will be headed here, as well.

I’ve already covered quite a few of the Knights pitchers here. Jon Link is an especially interesting arm. Jack Egbert’s move to the bullpen should be intriguing as well; he’s the sort who may benefit from the little bit extra on his fastball and the (likely) increased MPH differential between his pitches now that he’ll only be expected to pitch an inning or two. The early return for both pitchers (and the Knights as a whole) were not promising today.

A Prospect to Watch: Justin Cassel is a 24 year old righty who was drafted in the seventh round in 2006. A shoulder injury in 2007 set him back but he rebounded in 2008 at Birmingham to put together an acceptable campaign. He’s certainly not going to overpower anyone – he’s lucky if his sinking fastball reaches 90 MPH – and his curve and change are both average pitches. However, he could provide useful starter depth and a future as a swingman-type is reasonable.

Vacation? Wait until summer for some promotions.

Now the Barons, on the other hand, are stacked. The top five White Sox prospects – Gordon Beckham, Aaron Poreda, Brandon Allen, Dayan Viciedo, and Tyler Flowers – will all be starting the season in Birmingham. It also appears as if someone really wants this team to win as some guys who probably should be playing in Charlotte – most notably outfielders David Cook and Stefan/Maurice Gartrell – are going to be lending their experience.

While the rotation will be headed by Poreda, Lucas Harrell will look to continue to justify his protection on the 40 man roster in his second year removed from elbow surgery. They’ll be joined by 2007 third round pick John Ely. Brian Omogrosso is apparently back to starting, as he takes the hill tonight in Barons' Southern League opener. Clevelan Santeliz, the random addition to the 40 man roster this offseason, will start the year on the DL. That could be a real injury or, for a guy as raw as Santeliz is, that could be code for "extended spring training" or even "visa issues" - as a member of the 40 man, Santeliz needs to be assigned to some roster. Other notable pitchers include Swisher bounty Jhonny Nunez.

A Prospect to Watch: We all know about the big-time prospects so let’s focus on John Ely. The 23 year old righty has an average fastball in the low 90s and equally average, though promising, curve and change. His K/BB says he’s got good control. If he can improve one of his secondary offerings - his curve can flash as plus - he could profile as a #4 starter.

Vacation? Go now before everyone has left.

A couple of 2008 draft picks headline this newly re-named affiliate (in case you’re wondering about the team name, “the Dash” is a nickname for Winston-Salem). Third round pick Brent Morel sped through Rookie Ball and Low A last year – as a polished college hitter should do – and he’ll look to replicate this year. While scouts question whether the power numbers will hold up at higher levels, his contact skills and good defense suggest a major league future in some capacity. Seventh round pick Jordan Danks impressed at his cameo at Kanny and, after Gartrell’s shoulder injury, came out of the Instructional League to hold his own in a cameo against more advanced competition in the Arizona Fall League. His defense, speed, and good on base skills also suggest a major league future. I’m very high on Danks (as I was on the other one - let's sign the sister, too) and I’m anxious to see how he deals with advanced pro pitching over a full season. Watch the K rate closely.

The pitching is pretty meh. While there are a few interesting guys – Michael Dubee, Hector Santiago, and Jacob Rasner – there’s not much that really projects to the major league level at this point.

A Prospect to Watch: Rasner is another player in whom I am disappointed in where the White Sox have placed him. He pitched well enough last season for Winston-Salem to be pushed to Birmingham. He’s got a low 90s fastball and induces enough groundballs; if he cuts his walks a bit, the Sox could have something. I hope he’s successful early in his repeat and gets pushed to AA quickly.

Vacation? Any legitimate CF prospect in this organization is worth a visit.

More of the 2008 draftees are here. While some think Daniel Hudson and Dexter Carter (pictured above) should have been pushed to the Dash, I’m more sanguine about their placement. The Old Dominion teammates dominated the Pioneer League. Hudson has more polish but Carter has the better stuff. The knock on Carter was control but the White Sox made tweak to his delivery by having him throw across his body less and stride more toward the plate. The result was more strikes with a low 90s fastball and a plus curve that’s helped him get more than a K per inning. I expect the two to move quickly to High A.

The hitters are led by shortstops Tyler Kuhn and Eduardo Escobar, and 3B Jon Gilmore who came over in the Vazquez trade. Kuhn tore up the Pioneer League after being drafted out of West Virginia but don’t expect the slugging to translate to higher levels; his defense is also probably more suited to 2B and Escobar will likely handle most of the SS duties. Escobar was signed out of Venezuela in 2006 and the 20 year old made his US debut last year at Kanny. He has plus speed and is a great defender but a poor hitter – little strike zone judgment and no power. He’ll need to improve the former. Gilmore is also 20. He was a supplement first round pick out of Iowa high school. He’s a good contact hitter and scouts think the power will come. Like Escobar, he also needs to improve his strike zone judgment.

A Prospect to Watch: Drew O’Neil was a fourth round selection in 2008 out of Penn State. The righty is a sidearmer and has an unusually quick sinking fastball for someone with his kind of delivery. The reliever had a ridiculously high ERA at Great Falls but his peripherals told a different story. His sinker, coupled with his sinking fastball, induced a 4.00 GO/AO (groundout/flyout ratio) and 40 strikeouts in 31 innings. His command is inconsistent and will need to improve as he moves to higher levels.

Vacation? See them now before they become famous.