May I Suggest A New Approach to CF?

Share All sharing options for: May I Suggest A New Approach to CF?

It would be easy to sit here and point to the Rangers' roster and say look how easy it is to find a decent CF option. Their starting CFer is on the DL, and yet they still have two players waiting in the wings who are probably better than the Sox best option coming out of spring training. 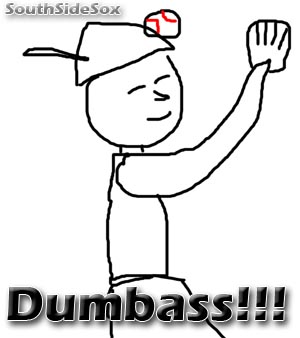 But we could just as easily pretend to be a Rangers fan pointing to the White Sox roster and say look how easy it is to develop pitching. Don Cooper and the Sox have taken Matt Thornton and Gavin Floyd off the scrap heap, and turned them into useful major league pitchers. And most importantly, we're still wearing our Rangers hat here, helped develop John Danks into a top-flite starter.

The Rangers center field situation offers a great point of comparison to the Sox. Since '05, they've cycled through Gary Matthews Jr, Kenny Lofton, Josh Hamilton, Marlon Byrd and now Andruw Jones in center field. Meanwhile, since trading Aaron Rowand, the White Sox have stumbled through Brian Anderson, Darin Erstad, Jerry Owens, Nick Swisher, DeWayne Wise and now, finally, Scott Podsednik, who wasn't seen as passable starting option in CF in '05, but now becomes the de facto CFer after injuries have removed all other options. Plus the Sox have traded Chris Young, Ryan Sweeney and Swisher in addition to Rowand over that span.

Given that roster churn, with the Sox trading away 3 starting major league CFers (10% of all starting major league CFers!) and one passable (poor defensive) option while sticking by a host of replacement-level-or-worse options, it would be easy to suggest that the Sox lack the ability to properly evaluate major league talent at the CF position. Things aren't quite that simple; salary considerations and Brian Anderson as near-league-minimum fall back option have played a large part in many of those decisions.

I'd argue that Brian Anderson's lack of development -- or stagnation, because if he had completely cratered as a prospect he never would have been considered as a fall-back option -- has held the Sox back at one position more than any other single player/position in recent memory. And that's still no excuse to have Scott Podsednik starting in CF tonight.