Share All sharing options for: Playing With Matchups - White Sox vs. Blue Jays 5/15

Cecil was drafted in the first round of the '07 draft as a closer, but his build and repertoire made him an obvious candidate for starting and in '08 he showed he was very capable in that role.  He debuted in High A Dunedin, was promoted after just four starts and then dominated the Eastern League.  By the end of the season, he was in AAA, where he started the '09 season (albeit in Las Vegas as Toronto switched affiliates).  The Blue Jay rotation has since been decimated by injury which necessitated Cecil's call up.  Kevin Goldstein said the following about Cecil during his International League stint:

On Saturday, Cecil delivered his second straight outing of seven shutout innings, only this time he did it by holding his opponent hitless while walking two and striking out five. Across three levels, he's allowed just 94 hits in 113 innings while compiling an impressive 124-to-37 K/BB ratio thanks to excellent command of a low-90s sinker, a fantastic slider, and a solid change.

Cecil came into the '08 season the #3 prospect in the Jay's system according to KG, with a mid-rotation profile and concerns about the transition from reliever to closer.  By '09, KG saw much the same in terms of ceiling and floor, though the scouting report changed somewhat:

The Good: Cecil's bread-and-butter is his 88-92 mph fastball that can touch 94 and features outstanding sink and run. He pounds the lower half of the strike zone with the pitch, generating plenty of ground balls. He throws two breaking balls, with both his slider and curve ranking as at least average and flashing as plus.
The Bad: His changeup is still a work in progress, and he'll need a more consistent off-speed offering at the upper levels. He lost a touch of velocity toward the end of the season, leading some question as to his ability to deliver 30-plus starts and 180-plus innings annually. While he has a deep arsenal, he doesn't have a true wipeout offering, and he'll always need a good defense behind him.

Cecil has recorded just 28 starts above High A, so some variance in reports is to be expected.  But it appears that he'll show what amounts to two plus pitches: his sinker and likely his slider.  The lack of a good change should make for some elevated platoon splits.  The pitch f/x gamelogs mostly back KG's stuff assessment.  His last start was against the A's on May 10: 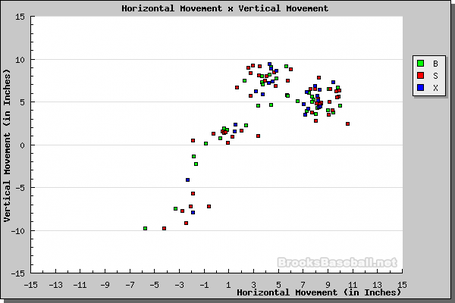 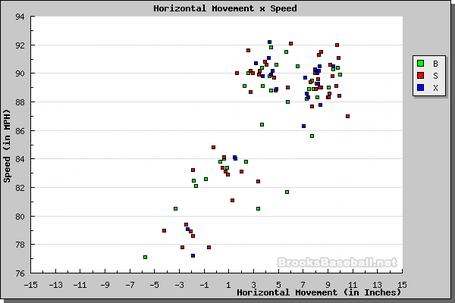 I don't have a crazy awesome algorithm, but just eyeballing it, I see a sinker (more run than rise, bit slower) than a four seamer (harder, more rise than run), a slider and a curve.  The A's threw out a fairly lefty-heavy lineup whereas in his first start the Indians had only Choo and Sizemore.  Thus, in his first start, there's evidence of the aforementioned change: 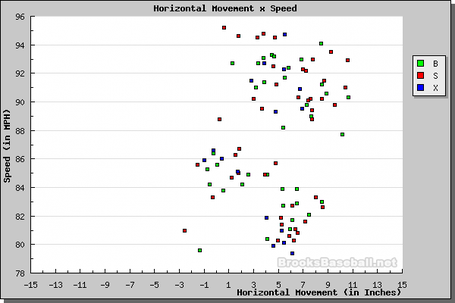 As a young recently transitioned starter, he likely doesn't yet trust his curve and change and they probably come and go from start to start.  And to some extent, he's demonstrated that he may not need all four pitches every start.  His major league line so far is sparkling, good for a 2.58 FIP.

The big thing is the number of grounders he's been able to induce.  Over his brief minor league career, he got more than 60% GBs, which is even more impressive considering his left-handedness.  My guess is that he mixes the four and two seamer against LHB, good for both GB and whiffs, while sticking mostly with the sinker agaisnt RHB.  Sox batters haven't shown any particular predilection for hitting the ball in the air so far this season, so I imagine there will at least be struggles early getting lift on the ball.  It will be no help at all that the Jays are so good defensively and that the Sox lack speed entirely (by James' speed score, they're collectively 4th slowest in the bigs).  If Cecil's command is strong, it will likely be tough sledding, though it's not exactly clear how good his is at this point.  The track record isn't long enough.  He's issued just two walks in 14 major league innings so far and been consistently in the zone.

Ideally, Cecil's lack of diverse offerings to righties will catch up with him and the middle of the order will hit some home runs.  It's critical to take pitches early in the count, as seeing enough of the sinker should enable hard contact.  Additionally, the cost of a strike is lower than usual.  For one, batting a ball is likely to be less valuable because of the high proportion of groundballs Cecil gets.  Second, Cecil's lack of an out pitch should mean that hitting with 2 strikes will be less hassle than under normal circumstances.  In the very least, a right handed hitter is unlikely to see something both new and in the zone in any given PA.  On top of this, Cecil has shown a tendency to lose his velocity toward the later innings, which long PAs will only further encourage.  RHB will be forced to put the ball in play, LHB will likely struggle. If JD isn't appealing his suspension, it's going to be a pretty ugly lineup.  Personally, I vote for Wilson Betemit being staked down in left for a game with a glove tied to his head.  Relatedly, I think I dislike Pods more than Jerry Owens at this point.  At least we have a chance to match zeroes with Danks on the mound.