Although e-gus perfectly and concisely summarized the night, I naturally feel compelled to do a more in-depth recap of the first SSS outing.  I will undoubtedly exceed far more than 75 words, but I will try to keep the sentimentality at a minimum.

The game on the 22nd was fun beyond expectations.  And that says quite a bit, since I can’t remember anticipating something (other than my entire trip) so much in a long time.  When you get that excited for something, it is rare that the actual event lives up to your hopes.  The opportunity for failure and disappointment is never greater.

Well, it didn’t rain again my entire trip and I got to enjoy two perfect evenings at Comiskular; first with Buehrle’s win over the Twins on Tuesday, and then Floyd’s shut-out on Friday, with the SSS crew.  Both were magical evenings.

Because Chiburb is, as you all know, a crotchety OPOS, he did not want to come out to the game.  Instead, to show appreciation to some of the contributors, he hosted a few of us at Miller’s Pub before the game.   I got there first to hold down the Bill Veeck section with my dad.   But by the time I came back from the bathroom, there was another OPOS sitting there: winningugly. 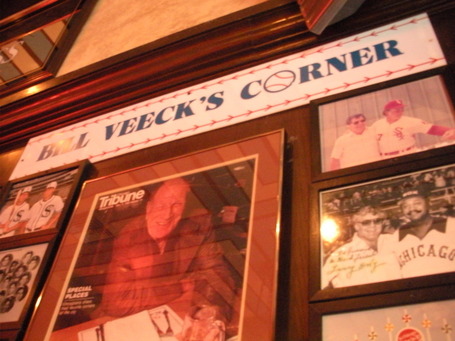 From there, we all sat watching the door.  And one-by-one, they arrived.  First, The Actual el Guapo, who was immediately identified by WU and my dad, for the fact that he practically had a sign around his neck saying, "I’m a big Jew."  You know WU can spot one a mile away…  Oh, and in case you wondered, Guapo is as fucking hilarious as we thought he was…it’s not just a fancy internet façade.

A week or two prior to the game, we had a drop-out (BustedFlush, who understandably had an out-of-town family engagement for the holiday weekend, and who did not seek out reimbursement) and subsequently an extra ticket.  I offered it to Carl, as a big thank you for all he's created.  As a scarce lurker on SSS, Carl was hesitant to be thrown into the mixture of strangers and inside jokes…but once initial nerves had passed, Carl (not surprisingly) fit right in with the rest of us.

Upon inviting him, I told him he was going to be a surprise to the rest of the group and he laughed at me and told me it would be my "lame funeral."  Little did Carl realize that he is practically a deity to the Pale Hose fans.  Even Cheat was taken aback and had a little twinkle in his eye when he met him at Miller's… My lame funeral, be damned!

Almost as remarkable as Colin’s hair.  Oh, the thick locks of ginger that flow from that kid’s scalp…it was enough to make Chiburb (and others, I’m sure) green with envy.

Larry walked in and the recognition of his infamous noodle arms was immediate.  When he sat down, he was promptly grilled about the wedding ring on his finger ("Is that real?" and "So what the fuck exactly is wrong with her?") and whether he was actually a lawyer; which he defended by holding up his leather briefcase (as though that somehow distinguishes him from any other profession, including organized terrorist).

After rallying the troops and finishing larry’s beer for him (he’s a lightweight), we all kissed Chiburb goodbye and took off for the El to the stadium.  A short ride later, we were at the park, headed for the arranged meeting gate.  I made a crappy sign to round up the group of strangers (one side: "SSS", the other: "IN THE MOUT!!"), but realized it was not necessary when we approached the gate and there was a group of people standing around drinking Schlitz and Hamm’s (classy).  The second I saw them, I knew it was the rest of our clan.  Cheers erupted from both sides.  I had a cold Schlitz in hand before I could even reach the gate.   That's love, folks.

And that’s when I met LT-Sox-fan, king of the smiles and good times.  He ran up to me laughing hysterically…apparently he expected the 400-lb, sausage-fingered HSA…the fact that I was not, kept him laughing and high-fiving all night.  He was a trip.

The game passed much too quickly.  Figuring we had Floyd on the mound, I was sure we’d be there for hours, or at least have a 90-minute 5th inning.  But no, Floyd pitched Buehrle-esque and kept the game under 2 hours, a bit to my (our?) dismay.  Like e-gus said, we were all really enjoying and getting to know each other by the time Bobby was closing the game and the fireworks show was starting…  Heck, despite seat-shuffling all night, I still didn't get to talk one-on-one at length with everyone.

From there, we went back to Diablo’s truck and had some more beers, played some bean bags, and fired up the grill.  It didn’t take too long for the lot to clear out and the security golf carts to piss on our parade, but we made the most of our short time together anyway.

We all dissipated to our respective cars, or to Skanberg's, who apparently became the designated driver.  Cheat, Trooper and I (along with my oldest and dearest buddy, Mike) went to the Red Line, drinking beers along the way (Cheat was obviously feeling healthier after a beer or two…he started the night by drinking water and claiming he was sick).  Even the Chicago police officer at the El stop didn’t give two shits about our public alcohol consumption directly next to a deadly electrical current.  I love Chicago. 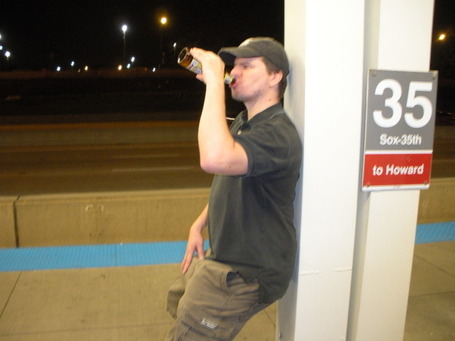 Above: Trooper, waiting for the el....excellent pose, Troop...we can tell you've had plenty of pole experiences before.

Overall, this was a night that will be long etched in all our memories (etch-a-sketched in LT’s, the drunken buffoon! :)).  I certainly had my hesitations and my reservations going into the event…some people called me crazy and warned me as I embarked into an evening with about 20 strangers, mostly men.  But no matter how rationally I perceived and approached the situation, I simply knew it was going to be a success.  I felt no fear, nor did I ever feel insecure for my safety and well-being.  I simply trusted you fools.  And had the reassurance of larry as a bodyguard.

One very fleeting concern of mine, was that people would be different in real life and we wouldn’t be able to hold real conversations with one another.  The comfort of being faceless on the internet gone, how would we interact? Truth be told, everyone was exactly how they are on SSS.  We made each other laugh all the same, we celebrated and embraced one another when Che sent one out of the park, we made fun of Colin and Lar-bear and called WU an OPOS... My dad and WU got to compare notes on ex-wives and the rules of turning 50.  And thecip really IS in love with Q, by the way.  I've never seen such a man-crush before.  It's real. Every time he appears...

Honestly, the game went by in a blink and not only because of the low score.  As Kermit T. Frog would say, "Time’s fun when you’re having flies." 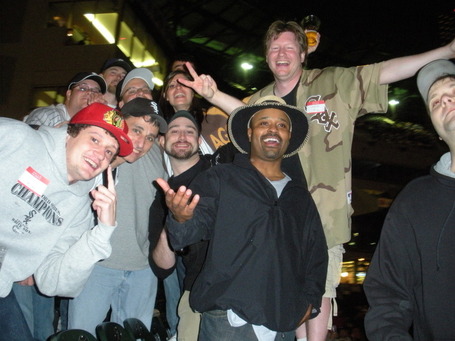 I could have stayed and shot the shit with you jackasses for hours longer (I guess that's kinda what we do every damn day, heheheh) and I certainly plan to organize another game next season.  I probably won’t be back to Chicago by the time this season ends (unless the Sox see some unlikely post-season love), but this should definitely be an annual event.  And I’d be happy to take the task of organizing under my wing again (especially if I am showered with ‘thank you’ beers practically every inning) because you all made it pretty painless for me by paying and showing up on time (even I was late, though I blame larry and his slow, effeminate beer-sipping for that.  I practically had to pry the beer from his hands - which was not hard to do - and chug it just so we could get to the train).

I’ve spoken before about how we all come to SSS for different reasons, but under the same basic purpose: we love the Sox.  Friday night practically marked my anniversary as an active commenter, despite having read and known of the site for years before that.

Moving across country and removing myself from the culture that is my home baseball team – especially in a city like Chicago, where the sports culture is rich and embedded in the lives of its fans – caused a certain void in me.  SSS has become my community and outlet for discussing and learning all things about my team, and I am ever-grateful for stumbling upon this place and meeting the intelligent and hilarious people who frequent here.  While we share the common ground of White Sox baseball, we inevitably learn much more about one another through daily discourse.

It may sound sad or desperate or ridiculous to an outsider (or even some of you insiders) who does not experience the daily interactions of us SSS'ers and our camaraderie…but some of you guys have really become great friends of mine in the year that I have known you.  I enjoy conversing more with most of you people, than any of the folks I’ve met in Seattle in two years of living here.  That is the truth, Ruth.  I know that part of the great chemistry we have is due to that special fabric of a Chicagoan – the most ruthless and vicious people to a degree, but also the kindest, funniest, and most passionate people you’ll find anywhere.

And while it's easy to assume we are all deformed and ugly and why else would we spend so much time on a blog, etc....maybe some of us just enjoy the even plain that the internet allows.  No prejudice until your mouth opens.  :)

I spent a full brilliant week in my home city, with all the loved ones I’ve known since childhood.  And I finished my trip with 20 relative strangers, on the highest note possible.  I flew back to Seattle at 8 AM Saturday, with a heavy heart, but a gigantic smile for all the irreplaceable experiences that this trip provided me.  Especially the outing that will live in infamy.   Not all internet meetings go as smoothly... or so I've heard…

Thanks to everyone involved and all of you who couldn’t make it to the outing, but still fill my days with laughter and knowledge.  Big thanks to Diablo and others for organizing the tailgating.  Excellent work!  It was pleasure to throw together such a wonderful memory for us all. 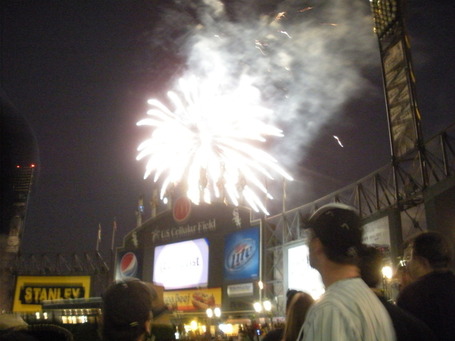 Above: Our fearless leader, enjoying the fireworks and a win. 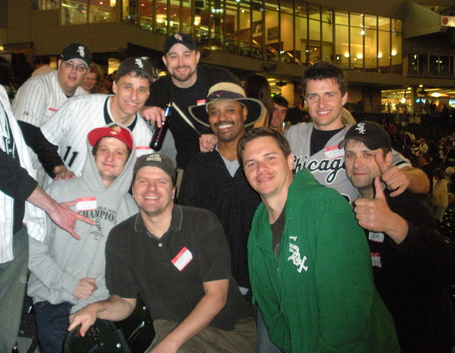 Above: Thumbs up!  No major deformities!