Share All sharing options for: Playing With Matchups: White Sox vs. Angels 5/25

The Sox face off against Ervin Santana tonight in what will be his third start of the season.  He's getting back from a sprained UCL, about which BP had the following to say in their Team Health Report series:

Santana is dealing with a sprained UCL, and while it's not enough to require surgery yet, he's not expected back until early June. Right now the plan is to let him rest, and hope that the ligament can scar up and allow Santana to pitch. Scar tissue is, at best, usually only about 70 percent as strong as the regular ligament, and though it's rare, if the scar tissue overlays the healthy ligament, he may be fine. This looks a lot like what happened to Francisco Liriano in '06 when he sprained the ligament, rested, and then it snapped in his first game back. The Angels will do everything they can to avoid that situation, but surgery may be inevitable. The timing couldn't be worse after Santana had busted out with a huge year in '08. Frustrated Angels fans everywhere may continue to wonder what the team's rotation would look like if it ever had Santana and Escobar healthy and productive at the same time.

Obviously he's back a bit early, but there are clearly questions about how he'll bounce back from his excellent '08 season.  So far his velocity has been significantly lower than his 93+ mph career average.  See, por ejemplo, his most recent start: 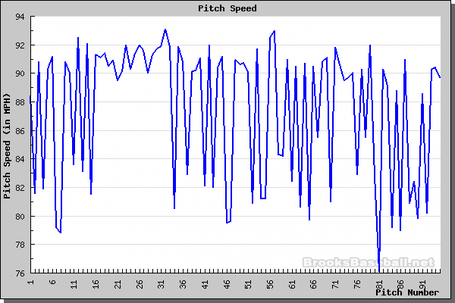 I don't know anything about the pfx gun in Seattle, but he pitched there on 9/22/08 and was clearly a different pitcher: 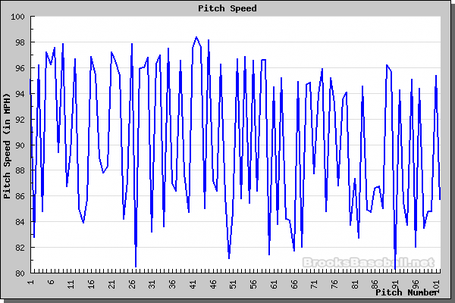 It looks like a 3-5 mph difference or so.  Last season he was one of the hardest throwing starters in the majors.  He's shown about an average heater thus far in '09.  That's a substantial change, particularly considering that he more or less abandoned two pitches in his repertoire in '08 (his change and curve).  He did appear to throw a few changes in his latest start, but it seems to be mostly in line with the small number he threw in '08.  Kalk's algorithm identified zero last season, so I have no idea how good a pitch it is.  Presumably, if he ditched the pitch, it couldn't have been that effective.

He still gets significantly more rise than run on his fastball, similar to Octavio Dotel's in shape and velo, and he does have a good slider. Consequently, he should still be able to get whiffs from RHB.  He will be more homer prone as what were previously lazy opposite field fly balls will get turned on, but as long as his slider isn't entirely a production of his fastball's velocity I doubt he'll struggle overly against righties.

LHB are a whole different story.  For one, he had problems with ISO against his slider even in '08.  This isn't uncommon.  Backdoor sliders aren't especially effective and Santana liked to go down and in instead.  Down and in just so happens to be most MLB hitters' wheelhouse.  He still got whiffs, but also dealt a few gopher balls.  With a less impressive fastball and a change he's unwilling to rely on, things are going to get dicey.  Fewer K's mean more batted balls means more fly balls means more home runs.  And he'll have a smaller margin of error, which will likely mean more walks too.  Adapting rapidly to lesser stuff is a tall order and I can't imagine it's any easier knowing he's trying to stay off the DL.

Unfortunately, the Sox are not particularly well suited to capitalize on even a hobbled Santana.  It's a righty-dominant lineup and it's main lefty masher is Jim Thome, who just so happens to struggle against all manner of breaking balls.  Getz has no pop and Scott Podsednik makes me reach for my rusty screwdriver (BLAOW!), though AJ could do some damage.  This would be a good time for some Betemit.

I don't want to sound overly pessimistic (well I do, because Sox wins and personal gloom-and-doom seem to correlate quite well, but it can't be that much fun to read).  This is a good fastball hitting lineup and Santana is definitely not throwing anything with sink or run.  JD, Paulie and Q! will have their shot to knock one out and even Alexei seems to be coming around.  It would be nice if someone gets on base for them.  The Sox are fourth-worst in the MLB in walks per plate appearance.  Santana has struggled throwing strikes so far.  Try not to help him out too much, 'k guys?