Share All sharing options for: Mark Buehrle said, "Nice Pitch." I said, "Thanks."

Recently, the smoking hot wife of e-gus won the 'Jim Beam take the Mound Sweepstakes.' The grand prize included four tickets to the Jim Beam club($270 tickets including free eats and an open bar), an autographed Mark Buehrle jersey(home white, which we all know he doesn't wear but is still bad-ass) and the privilege to throw out the 'first pitch' at the game. Well it all went down 9/9/9, with Mrs. e-gus deferring the honor of playing catch with Mr. Perfect to me, e-gus himself. This is the tale of that fateful day.

What was billed as the first pitch was really one of three first pitches. I was the middle reliever.

We were told to meet up with the Jim Beam folks at 6:15 so at 6:10 we head into the media entrance by gate 4 and wait. Also waiting there are Harold Reynolds and Tony Siragusa. The show Man Caves is on the DIY network and basically Tony Siragusa stands around while some dudes paint a room of your house and give you a new TV and stuff like that. They were giving away one with an MLB theme and some sissy won the prize even though he married a Cubs fan. I guess the house divided was their angle and it paid off. This trumped my Jim Beam prize so this guy got top billing when it was time to do the ceremonial first pitch.  More on him later.

The first pitch(es) didn't actually happen until 6:50 or so, which left a lot of time to check out the Sox office and make a couple new friends. Both Harold Reynolds and the Goose were really friendly guys and didn't seem too put off to take a quick photo. I mentioned I was throwing out the first pitch and asked Harold if he could get me on the MLB network. He looked worried since he was there to do the Man Caves show with the guy throwing out the first pitch who wasn't me. The Sox championship trophy and ring was also on display right there which was so great to see up close. 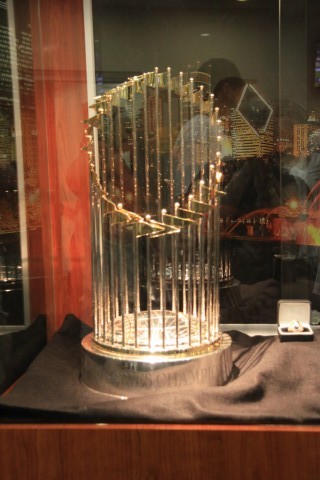 The reps from the Sox and Jim Beam company were all incredibly friendly. They seemed genuinely happy to give the prize to actual Sox fans since their last big promotion ended with $10,000 going to a non-drinker. I told them I was the right guy since I pound their product in the bullpen bar about 20 times a year(and about 10 drinks each time). After shaking hands and smiling we were brought out on to the field. I started getting a few butterflies but watching the Sodfather handle his business had a calming effect. He preps the mound and home plate himself. 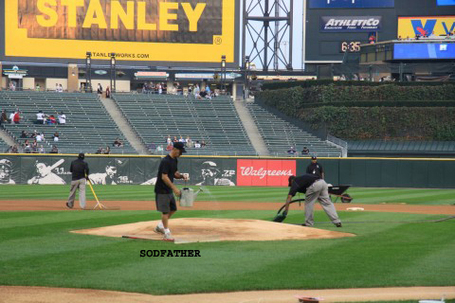 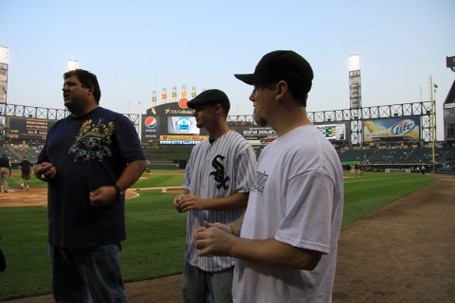 There was a lot of time to kill out there so my new pal Goose came over to share some peanuts with my brother and I. This helped as I was a bit nervous about the fact that the other first pitch guy was playing catch with Harold Reynolds while I was just sitting around waving to various friends and relatives scattered around the park and eating peanuts.

The Sox people give me the run down and I come to find out that I am going second after the other guy and before the representatives from the WWE. So this other guy gets announced and heads out there, but he doesn't even toe the rubber. I was feeling a bit jealous of this dude because Reynolds was taking him around and introduced him to Ozzie, had him talking to Mark, just keeping him loose while I just stood there basically thinking about how sweet my back room would be with a Sox paint job and a new plasma. Anyway, did I mention that sissy boy didn't even toe the rubber? 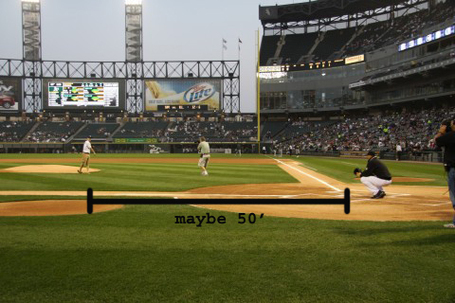 I was no longer jealous of this guy. Siragusa started heckling him to move back. Sally stays where he is and chucks one into the dirt making M.B. field it on a hop and way into the left handed batters box. Basically my worst nightmare. Harold Reynolds was saying "Buehrle tried to save him." and I felt like I was home watching the MLB Network. The Goose told him he had to walk home. I am now a fan of Tony Siragusa.

So now its my turn. My big plan was to go out there and wave as if the place was going ape-shit crazy. My grandparents actually made it out with an aunt and uncle and were down the first base line so they would get the first wave before I let the rest of the joint bask in my glory. Well, I get on the mound, look for the fam and realize I cant make them out of the masses and holy-crap-there's-a-lot-of-people-here-throw-a-strike-and-get-the-funk-outta-there races through my brain. After my half wave, I turn, see the glove and fire. 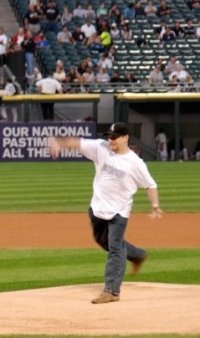 A smattering of applause for the guy who can actually throw the ball 60 feet 6 inches without moving the glove too much. Number 56 trots half way out to the mound to hand me the ball. I walk up to him, as he hands it over he says, "Nice pitch." I say, "thanks." and trot off. Mark Buehrle style I was out there for maybe 10 seconds or at least thats what it felt like. 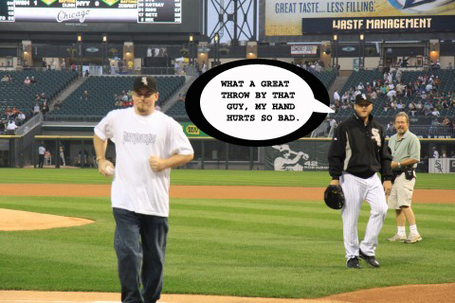 Unfortunately, the Mrs. was nudged by a rude Sox employee who was in charge of the WWE folks and she didnt get any photos of the pitch. My cousin did capture a video of it on his i-phone from the field so as soon as I have that I'll link it here. I also expect to get some farther away shots from some people I know that were up both baselines as well. Ill just keep adding that stuff as I get it.

So now its the WWE folks: a midget, a hot blonde with nice legs and a couple dudes on the sauce shuffle out there. The guy on the mound laterals to the midget who chucks it into the air but still to home plate. I think that's how it went, I wasn't really paying attention as I was now right by the Sox dugout and trying to see what was going on over there while getting congratulations from my people. 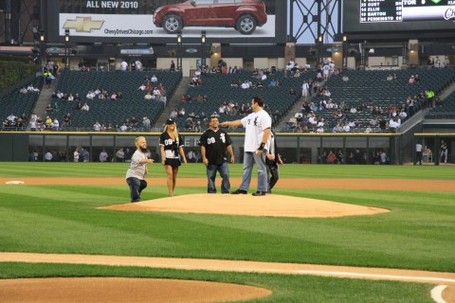 After their pitch they present AJ a WWE belt for being the best catcher in wrestling or something. Im supposed to stick around for MB to autograph my ball but they are apparently behind schedule so they hurry some country singer out there to do the national anthem. The Sox come out of the dugout to honor the stars and bars and suddenly Im standing right behind Ozzie. 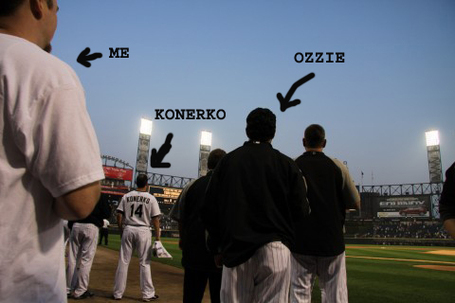 So that was probably the best part. On the field for the national anthem. Love it. I stick around and get my ball autographed and away we go, but first I have to let the umpires through so its another hurry up and wait. However, one of the security guys back there taps me and says 'nice throw.' I smile. 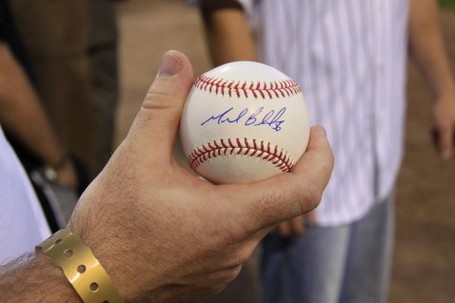 Through the tunnel. A run in with South Paw, and up the elevator to the seats in the Jim Beam club. First row, directly behind home plate. Man, these seats are tits. Here is a shot to put them in perspective. 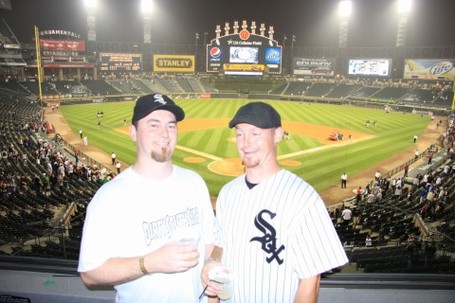 This was taken right after they won, as you can see there was no one there at the end of the game and I was wondering if you could hear us on the tv audio since we were right below Hawk and the Stone Pony. I'll have to review the tape. My brother was drunk but not retarded drunk, he was just screwing around for the picture(I think) but anyway, we did drink a lot. The amazing food just helped minimize the damage. Talk about a spread. They had London broil, mahi-mahi, roasted chicken, sausages, brats, bruschetta, a couple different kinds of salad, breads, asparagus, mashed potatoes, grilled peppers that were amazing on the sausages, man there was a lot of good food up there. The lounge itself is pretty plush. They brought out dessert in the 7th or so and had about 7 different kinds of cake, build your own sundaes, cookies, you name it. I pretty much stuck to the Jim Beam black as my dessert so I didn't sample as much, plus I hardly had room after eating like a pig earlier.

The game itself was ok. The punch and judy hitters seemed to be the only ones getting on consistently, Rajai Davis and Scott Podsednik 3 and 4 times respectively and swiping bags. They ran all day on Freddy it seemed, and Pena really pissed me off. Both of those hits he gave up to give away the lead were on 0-2 counts. Has this guy ever heard of wasting a pitch? And why pull Thornton? He cant go more than 17 pitches? It was a pretty wide plate all night but it seemed to be pretty consistent helping Freddy strike out 5. Neither team wanted to win it seemed. No Quentin or Beckham and the offense seemed punch-less. Dye looked terrible, striking out twice going 0-6. Rios seems to think he is playing with a t-ball bat, he is getting everything off the handle and not on the barrel it seems taking the life out of anything he hits, even line drives. When they hit Konerko to get to Dye that really pissed me off. Mostly because I had to watch JD hit again.

I never said that the Sox actually won the game in extra-innings, with a score of 4-3 in 13 innings thanks to some clutch hitting by AJ Pierzynski. 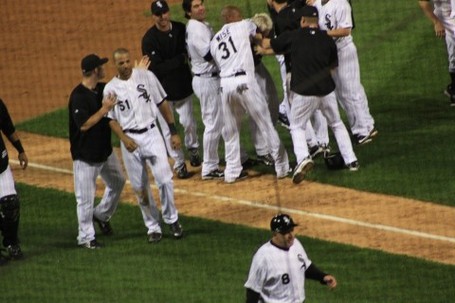 I set down a bag of Sox paraphernalia to make the pitch and no one ever picked it back up afterwards, so I missed out on a couple hats or t-shirts or whatever was in the bag, I never even looked. Whie the chevy girls were tossing out t-shirts the WWE guys were throwing some more out as well as wiffle balls(I think) from the press box above us and that probably got the biggest reaction from the crowd the whole day. 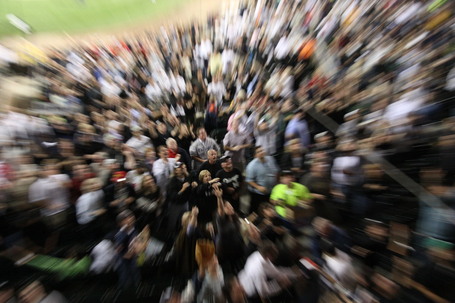 I just thought this was a trippy image so I'm putting it in. I love how the people in expensive seats go bonkers for crappy XL t-shirts tossed out the window in this case by the tiny wrestler Hornswaggle.

Here is the video link, i recommend not using the audio. I did even less of a wave than I thought.

Perfect strike at the knees on the corner though. You cant tell so much from the video, you'll have to trust me.