Brushing Up On Dan Hudson

Share All sharing options for: Brushing Up On Dan Hudson 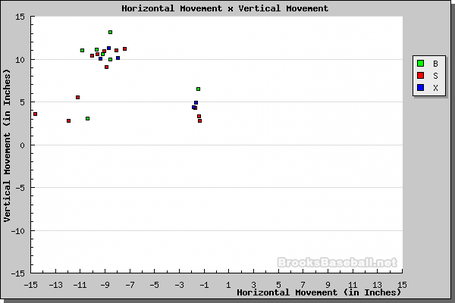 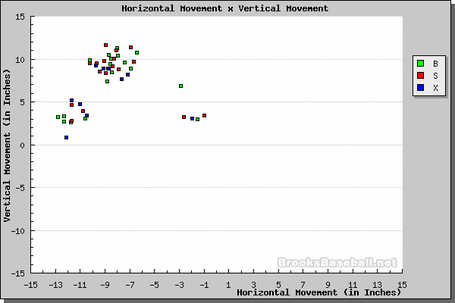 Most impressive so far has been his fastball.  The movement is nothing spectacular; the spectrum of rise over run for major league fastballs is from about 1/2 to 2.  The smaller the ratio, the more groundballs expected.  The higher, the more swing-misses expected.  Hudson's is in the vicinity of 1, so it isn't doing anything special.  The velocity is where it's at.  Of the 40+ he's thrown in relief so far, just 2 appear to have been below 93 mph.  I can't offhand find the article I'm looking for that addressed the velocity dip in moving from relief to a starting gig.  Iirc, it was 1-2 mph.  He's averaged 93-95, which still leaves him in the plus range when/if he moves into the rotation.  The scouting reports larry's posted in the Sox minor league fanposts have been somewhat vague, though Baseball America and Jim mesh pretty well (paywall):

Through the first three innings, Hudson’s fastball registered between 91-93 on the radar gun.  Over the last four, he was around 89-90, with an occasional 91.

There was some speculation that he may have fatigued somewhat, so extrapolating what we know so far is still something of a guessing game.  There's evidence that velocity increases up until age 29 for starting pitchers, so it's reasonable to project a plus fastball.  Ideally, he'd sit 92-93 and be able to add a little in 2 strike counts.  As Cheat noted last week his command of the pitch is good; true to form he's yet to walk a batter in his limited work.  All told, he should be able to induce weak contact and ground balls early in the count against average or worse RHB.  Finishing them off with the strikeout is another story.

A typical right handed slider is somewhere between 5 and -5 inches in vertical movement and 0 to 5 horizontally.  Hudson's slider is pretty weird.  It's actually had some tail to it so far; I thought larry was joking about the screwball.  Maybe not?  I'm with Cheat on this one, though: it seems to be a marginal pitch and may help explain his flyball proclivities in the high minors and his MLB stint.  Bad pitches are worth more runs.  If they're worth more runs, they're being hit in the air (either as line drives or fly balls).  Really, though, he's not capitalizing on the best pitch available to a righty facing an RHB.  This sweet graph illustrates nicely (read the whole article):

Click to embiggen.  Anyway, Hudson's pitch choice alone (far more changes than sliders), assuming he's being rational, is a serious indictment of his slider.  Normally, fastball/slider combo alone is enough to get same-sided batters out.  It just so happens that those two pitches have the largest splits, necessitating a third when at a platoon disadvantage.  Hudson is atypical in this regard, though a plus change would certainly help offset the slider problem.  Hudson is already very comfortable with his, obviously, and it passes the pfx sniff test.  There is significantly more horizontal than vertical movement and the velocity disparity is sufficient.  It's got fade and he doesn't seem to have problems disguising it.

Putting It All Together

Jim noted a lot of K's via the fastball when he saw him in AAA, something that's very unlikely to hold up in the majors.  Something like 6% of fastballs end in whiffs, way less than half of all other pitches.  So we should expect his K rate to decline at least somewhat.  Additionally, he doesn't have a real out pitch to RHB -- he'll have smaller splits, but only because he's not dominating righties with a hard breaking ball.  Still, he should have enough velocity to get by and he's better prepared for opposite handed hitters than most young right handed starters.  Kevin Goldstein tagged him with a 3-starter ceiling.  That looks about right to me.