Share All sharing options for: Should The White Sox Retire Paul Konerko's Number?

There will come a day that Paul Konerko will no longer suit up in the black and white, and that will be both sad and strange. It hasn't happened yet this millennium, but the time is approaching. For the sake of argument, let's say that it happens this winter. No one is foolish enough to believe that Paulie is a Hall of Famer. He embodies the type of player that sportswriters will cite in their annual ballot articles as a member of the "Hall of Very Good". I love Konerko, but I don't think he'll be on the ballot more than a year (still holding out hope for Crime Dog). The numbers just aren't there. But what if we just choose to ignore his Hall of Fame candidacy and focus solely on his career with the White Sox. All but 81of his 1,849 games have been played for the Pale Hose. The true question is this: in his twelve seasons on the South Side, are Paul Konerko's numbers worthy enough for his number and visage to join the other nine on the left field wall?

When you actually take the time to look at how Paul Konerko compares to the other hitters in the 109 year history of the White Sox, you can't help but be a little impressed.

That is pretty damn good company to be in. With the exception of his disappointing 2003 season, he was an above-average hitter every season. If being an All-Star is the kind of thing that blows your hair back, he attended four Midsummer Classics. He is well-respected by his teammates and manager, being the first Sox player in decades to be officially named the team captain. And then, of course, there's this 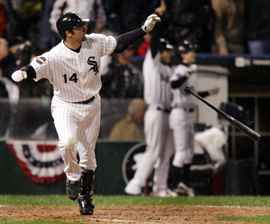 Add in the fact that he chose to stay in Chicago instead of going to Baltimore or Los Angeles after the World Series, and you have to figure he all but etched his own face into the padding when he gave Jerry Reinsdorf the final out ball from the World Series. Reinsdorf is one of the most loyal owners in sports, and it obviously went a long way with him.

The Chicago White Sox are not the New York Yankees, the St. Louis Cardinals, the San Francisco Giants, or the Cincinnati Reds. Being a good player on the South Side does not automatically warrant a place in the team's Valhalla like it does on the four previously mentioned clubs. How many non-Hall of Famers numbers should a team honestly retire? One could argue that during his tenure with the team that Paul has never truly been the face of the franchise, being overshadowed by Frank Thomas in his early years and Mark Buehrle in the latter seasons. He never won the A.L. MVP or finished first in any statistical category other than double plays grounded into during any season. It could also be said that the main reason he ranks so high in the franchise rankings is because of his lengthy tenure with the team. If Jim Thome, Jermaine Dye, or Dick Allen had played twelve seasons with the Sox, the odds are good they would be right up there if not ahead of Konerko in almost all of those categories.

I didn't enjoy writing that last paragraph. I know there is probably no chance that Paul Konerko will ever read this article, but it still hurt trying to come up with reasons to not give him the greatest honor he will ever have bestowed upon him. I thought about remaining impartial, or at least waiting until the comments section to say how I'd vote, but screw that. I wrote this diatribe and feel like I deserve to end it with my personal opinion. If through some amazing opportunity I had the chance to be the deciding vote on whether no other player would have the chance to wear 14 beneath their name, I would vote yes without any hesitation. What say you?