The Decade in White Sox Fielding

Share All sharing options for: The Decade in White Sox Fielding

Jeremy Greenhouse over at the Baseball Analysts compiled some basic but interesting fielding data:

I found every fielder's out-per-ball-in-play rates as well as the average conversion rates at each position. Nothing special. No handedness or batted-ball adjustments, no plays-to-runs conversion.

As Tom Tango pointed out at his blog, this is WOWY ("With or Without You") without the without.  Meaning, it's unadjusted for context.  So it's possible that some systemic bias (extreme park factors, like for Fenway, or guys who have fielded behind an inordinate number of groundball or flyball pitchers) is skewing the data.  But with a decade's worth of data, you can be pretty comfortable that, except for some outliers, this data is pretty good.  Thus, it's pretty tough for guys who are among absolute worst to not truly be pretty bad and vice versa. 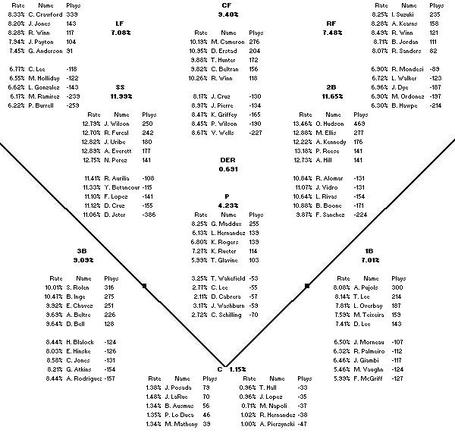 Clicking on the link may help those of you having trouble seeing it.

You can also see from this which positions get the most balls hit to them.  This gives a good estimate of how much other factors then simply fielding balls hit to them should be weighed.  So, while A.J. may be a pretty poor fielder, with only about 1% of chances going to catchers, we should pay more attention to his receiving skills or offensive ability.  On the other hand, a shortstop's fielding skill is a large component of his value.

Where things become a bit more interesting is the subsets of data he came up with.  Such as, instead of all balls in play, how about just bunts? Paul Konerko is among the worst first basemen on those.  Looking at the groundball data, it appears Paulie just isn't good on anything on the ground.  Tadahito Iguchi also shows up near the bottom of second basemen in that dataset.  And if anyone needed more confirmation of the greatness of Robin Ventura, he converted an amazing 20% of groundballs into outs, 4% better than the average of third basemen and outpacing the next closest by 2.5%.  And that was in his post-White Sox decline phase.