Huh, seems to be working.

Apparently I have not been overthrown and replaced by Kenwo (quite yet).  Though I'm still uncertain what is going on around here.  It's amazing really.  For the first time in years, I'm considerably removed from the site for a couple weeks because of some gnarly stuff happening at work; and I log in to discover massive shifts of power, seemingly grumpier and certainly older pieces of sh!t, polls that don't have Jerry Owens as an option, people rec'ing comments by ChangesMadePost-ASB...  too many horrors to even mention.  In the words of the great and wise Towelie, I have no idea what's going on.

And I don't know about you hot-blooded football-lovin' types, but to fight off my usual offseason sadness, I've been enjoying archived Sox games since the season ended.  Between baseball-reference helping me to recall the dates of great games, and MLBTV allowing me to pull up any game from the past few years, I'm having a helluva time kicking back with some oldies but goodies.

Even with the classic games that you can still feel in your gut for certain magical moments, there are so many cool little things that your (or at least my) mind has forgotten over the years.  The neato bandito non-highlights, if you will.  I recently watched game 162 of the 2008 season, and had forgotten just how dramatic was the lead-up to Alexei's slam... being behind 2-1 when the Sox' 6th inning started, then tying it at 2 and loading the bases for the skinny Cuban rookie.  Sweaty Freddy lights-out for the Tigers before the (also) imperfect reliever Galarraga began blowing it for Detroit.  Inge's bare white arms before the devastating ink attack (dude was still HELLA fugly of course).  And a big and hairy Floyd throwing eight strikeouts over his six innings of work - with a particularly memorable 11-pitch Granderson strikeout with runners on first and third in the 5th.

Anyway, if you're an MLBTV subscriber and in the mood, I recommend pulling up the ol' archives and strapping it down on a cold day this offseason.  Makes me all warm and tingly.  And if anyone recalls some great games from the past three years - the regular games, not the 163's or the Perfecto's for example, please leave a suggestion in the comments!   Unrelated, I wish those celebrating tomorrow, an enjoyable and restful Thanksgiving.  I am accepting turkey donations. 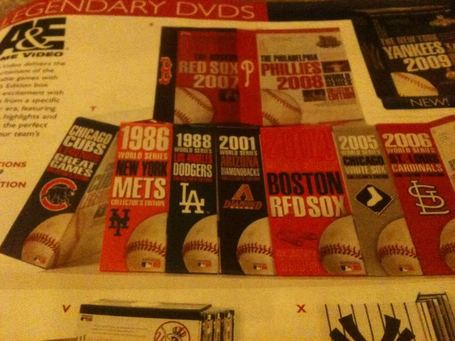 My favorite catalog next to every International Male I ever received.