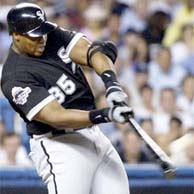 Thank goodness for Jim Fregosi, Fred Manrique, Dan Pasqua, a young Jack McDowell and Rickey Horton. Without their absolutely terrible 1988 season, the White Sox would not have been in line to pick 7th in the 1989 draft. The Sox made the most out of that pick when they drafted Frank Edward Thomas out of Auburn University. In a short amount of time, he would become known nationwide as The Big Hurt.

On August 2nd 1990, a little over a year after he was drafted, Frank Thomas debuted for the White Sox in Milwaukee going 0-4 with 1 RBI. In those two months that we got the pleasure to watch him play at the original Comiskey Park, we knew that we had something special. Thomas posted a line of .330/.454/.529 with 7 homers and 31 RBI in 60 games. He was also the last man in a White Sox uniform to hit a home run at Comiskey Park.

In 1991, we got to witness Thomas for a full season for the first time. He started the year off by hitting the first White Sox home run at the New Comiskey Park and ended the season with a line of .318/.453/.553 with 32 home runs 109 RBI and a third place finish in the AL MVP award.

After down seasons, at least for Thomas standards in 1998 and 1999 (even though he hit 44 homers and drove in nearly 200 RBI's in that stretch) Thomas came back with a vengeance in 2000. The Big Hurt again led the White Sox to the post season as he hit .328/.436/.625 with 43 homers and 143 RBI's. Thomas finished 2nd to Jason Giambi in the MVP voting. Giambi has since confessed to steroid use during that season. Thomas, on the other hand, was never linked to steroid use and was the only player who volunteered to be interviewed by the Mitchell Report.

After a season ending injury early in 2001, Thomas came back in 2002 to hit 28 homers and knock in 92 runs. After being injured and controversy over a "diminished skills" clause in his contract, Thomas came back in 2003 to pound 42 homers and 105 RBI's. Frank became a dead pull power hitter, which caused his average to drop to .267 that season, but he still finished 15th in the MVP award voting.

As his Sox career came to a close in 2004 and 2005, Thomas suffered from more injuries. Despite playing in only 108 games those last two seasons, Thomas still hit 30 homers and 75 RBI's. 12 of those home runs came in the Sox 2005 World Series Championship season. Thomas never got to play in the World Series, but nonetheless won his ever elusive championship ring. He also spoke at the Victory Parade which was his unofficial good bye to the Sox fans.

Thomas had a war of words with GM Kenny Williams as he moved on to the Oakland A's, but when the A's made the trip to the Cell, it was clear that the White Sox fans still had the Big Hurt's back. Thomas received a well deserved standing ovation and promptly hit a home run in his first at bat against the Sox. (This was when the video montage actually meant something before they started giving it out to every former Sox who ever played for the team). Thomas received a standing ovation as he rounded the bases, which was an awesome sight to see. Later in the game he hit another bomb, and turned around his 2006 season which went from really bad to really great. He led the A's to the postseason that year by jacking 39 homers and 114 RBI's. Thomas finished 4th in the MVP voting.

Later on today, Thomas will hold a press conference to announce his official retirement. His time on the South side was somewhat rocky, but anyone who got the privilege to see him play will tell you he is without a doubt one of the greatest hitters to ever step into the box. If you were a White Sox fan throughout the 90s, you know that you will never see another talent like the one and only Big Hurt Frank Thomas.