It appears as if e-gus is getting a little restless. T-dogg has headed for the hills. And Colin never bothered to sign up. We're soldiering on without 'em though. One man goes down, next man in, I say, like the '07 White Sox with more talent.

So if you're available for tomorrow's 1:45 PM draft, and would like to play in what will be a publicly visible league (once I can find the link in my inbox) send me an email, and I'll get you the info...

As for the league itself, we're going with a straight points based league, somewhere between a linear weights-based system and the standard Wins are good, losses are bad, stolen bases have the same weight as hits. As you can see, Quality Starts get more weight than Wins for pitchers, and a stolen base is worth half as much as a single. 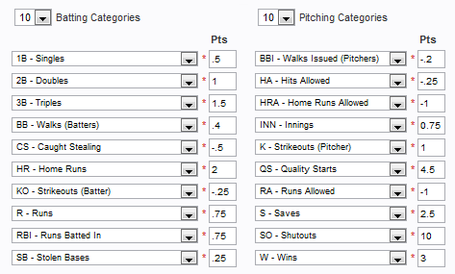 I do have one question that somebody who's more familiar with the CBSsports.com Fantasy Commissioner League, who (coughPLUGcough) are offering a half-off deal for SB*N members; Right now the league has "scoring periods" set to "monthly," and I'm wondering how does this effect gameplay? I set it this way just because it's more interesting than yearly points and gave us something to talk about on the blog. But does that mean there is a "winner" each month? And how does that work for a playoff system?

A full active roster is a robust 19 players, and you can theoretically have 30 players on your roster -- though our draft is only scheduled to go 27 rounds. There is space on each team to protect up to 6 major leaguers on the bench, 4 more on the on the DL (they really need to be on the DL), and 4 minor leaguers (who actually need to be in the minors).

There's a certain player who will probably rack up points at a high rate when he's eventually called up, but is due to start the year in the minors. I'll be very interested to see where he ends up going tomorrow.

I'll post the draft results early next week, so you can go through and make fun of Gus' selections, and we'll have monthly (or bi-monthly) updates on the progress of the teams in the league...

CBSSports.com is an SB Nation partner and paying sponsor of the SB Nation baseball communities. This post is one of a series of sponsor endorsed posts related to the CBSSports.com Fantasy Baseball Commissioner League.