I'm not going to offer a lot of analysis on this one, as I'm headed out the door.

Method: I simply use a straight average to come up with our Community Projection, and provide the Standard Deviation +/- to give you a PECOTA-like range of projected performance. And finally, I've listed a 5% correction (multiplying the community average by .95) to try to balance out the rampant optimism of Sox fans in March. It's not an exact science -- it's not even science -- so you'll find a built in error of H/AB not equaling batting average. But I don't care. I love to do these things. It's fun to see what you guys think, and what we can come up with as a group.

I have to thank you guys for participating. We had over 110 responses, of which I deleted only two; one person who had Pierre slugging 4.000 and another who stated his slugging was "N/A because slugging was a garbage measurement for a leadoff man." I especially have to thank one of you who took the initiative to email me with some excel help (even though I'm using Google Docs) to normalize the difference between entries that write average as "0.300" vs. "300." If anyone knows how to sort the final column of the raw data into a nice graph, drop me a line and we'll end up with some visually stunning projections in the future. 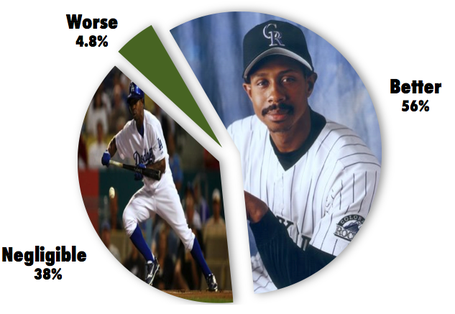