The game was close throughout after Buehrle managed to get himself back on track following a rough first three.  The Sox kept it close enough with both strange and familiar contributions, including a solo shot from Mark No Seriously Kotsay.  The Savior did the same and an early Konerko 2 run blast meant the game was tied heading into the 8th.  Buehrle set down Hudson, Mauer and Morneau: ground out, ground out, line out.

The bottom of the eighth showed again what the Sox can do with real hitters hitting 2-5, if only for a half.  A predictable Pierre ground out preceded a less anticipated Beckham weak roller, but Quentin and Konerko followed with singles.  Gardenhire gave Blackburn the hook after 7 2/3 IP and 98 pitches.  Can you somehow be economic and give up 3 bombs a game?  Evidently.  Gardy went to the lefty Jose Mijares and Ozzie called on Andruw Jones to regain the platoon advantage.*  Jones, continuing the Real DH impression, singled and everything looked sewn up until J.J. Hardy singled off Bobby Jenks to bring up Jim Thome** with a chance to tie or win with two outs.

Bobby was throwing gas and nothing but.  All four pitches came in at 96 mph.  The Masher tipped the first, took the second high, swung through the third and sent the fourth flying to the opposite field wall.  It looked like he guessed away and Bobby put it right there for the ol' slugger.  But he wasn't clutch enough to stop Hardy from trying to score from first.  Juan Pierre and his Designated Thrower Mark Teahen set up a solid relay to easily get Hardy.  5-4 game over, crisis averted and series salvaged.  A coin flip of a win goes to the Sox and it's off to Toronto.  But not before laughing at the ever professional grindaholic Twins for their costly vision and base rounding problems. 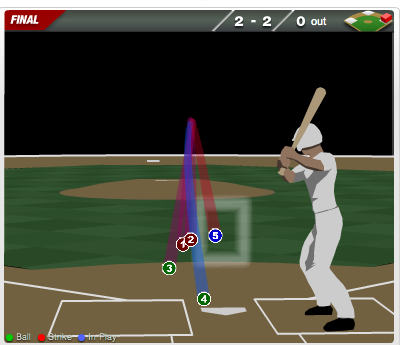 *Critical stat of the moment #1: pinch hitters managed a .665 OPS over the last three seasons. Critical stat of the moment #2: Mark Kotsay career vs. LHP - .726 OPS.  That's a 15-20 run difference over 650 plate appearances, but Ozzie only makes a handful of these switches over the year.  You can shoot from the hip every now and then, but there's a penalty for pinch hitting that eventually adds up.