Share All sharing options for: The Time The Nice And Worldly Soon-To-Be-43-Year-Old Led Us Into Battle

Well I mean, what did you people expect.

Ozzie done strung together his latest in fancy lineups tonight, to make yet another young pitcher earn his Temporary Cy Young Badge by effortlessly shutting down the White Sox offense.

This time, Blue Jays pitcher Ricky Romero gently retired respected veterans like Omar Vizquel; while practically slapping him on the ass and calling him Angela each and every at-bat.

Vizquel was a victim of merely 1/6 of Romero's total strikeouts over 8 innings of dominant work. He threw 2 K's each inning for the first 6 innings and a no-hitter through 7, before giving up his first hit - an undoubtedly blood-boiling moment for Jays fans - a 2-run blast off the bat of our Sand-Dancer, Rios.

What's this you say?  A 2-run blast would imply there was a baserunner!  AJ was up to his usual showmanship and faked taking a ball to the foot to start the inning.... an act that resulted in the first and only time a White Sox leadoff man was aboard all night.

Compare that to Floyd allowing runners every inning through the first 5, and it's sort of pleasantly surprising that we didn't lose by a larger margin.

Floyd actually had a nice game and should have come away a little cleaner than he did.  The 2-out, 2-run double by Encarcion in the 5th put the Blue Jays ahead 4-0, and it felt like the deal was sealed.  2 more quick strike-outs from Romero the next inning and that's when the giggle-cries began.   Uhh.  For me at least.

This game reeked an awful lot of 2009.  This game reminded me of that time last year when Trooper wisely declared:  "2009 is just 2007 in 2008's clothing."    This game inhabited years of frustrating elements of White Sox Baseball - a combination of good Sox pitching and terrible offense against a young never-before-seen pitcher; a laughable lineup that led-off with the likes of Omar Vizquel (no disrespect intended, but COME ON! /Gob); and a complete offensive shut-down after a 14-hit game the night before.

On a positive note, Linebrink pitched another successful 2 innings tonight; and that hardly ever happened last year on consecutive nights.  I find myself enjoying that when he comes in to pitch, the murderous rage doesn't have to boil within me for the half-hour that I am forced to look at him on the mound.  Babies don't get punted on nights like these.

So if nothing else, enjoy this one for the babies, folks.

Lots more WSB: Even If It Works It's Stupid left to play.  Stick around and maybe you too will someday have a chance to earn a Temporary Cy Young badge, courtesy of your Chicago White Sox. 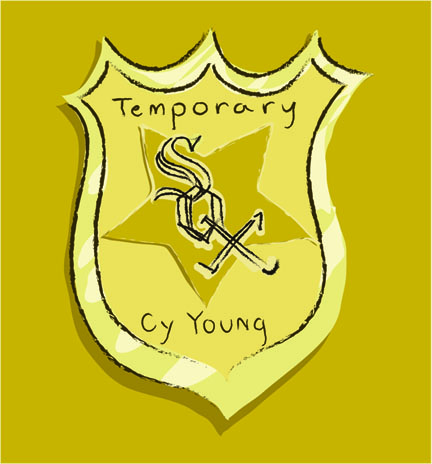