Share All sharing options for: Sympathy For Jim Joyce

We all saw (or have now seen) what happened.  We even lost it in our own gamethread.  I was all for suspending the man.  I wanted fire and brimstone.  This morning?  I only feel bad for him.  Jim Joyce was what you want out of an umpire.  He's been one since before I was born (1987), and had no controversy surrounding him.  Hell, the only noticeable thing about him besides his sweet mustache was his enthusiastic strikeout call.  I like that.  He didn't deserve to be remembered, because unlike the Joe Wests, Angel Hernandezes, Bruce Froemmings, and Phil Cuzzis of the game HE DIDN'T MAKE HIMSELF THE MAIN ATTRACTION.

And then in one split second, he defined his career. 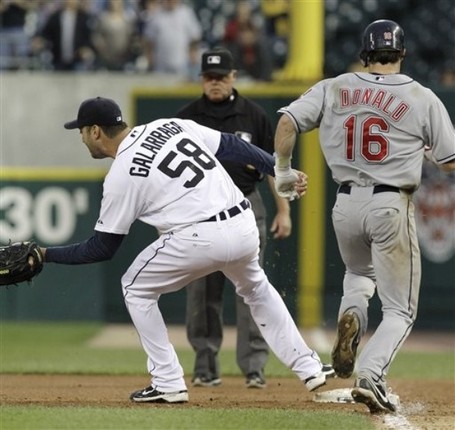 Jim Joyce went from just another umpire to being one that fans hate.  And you know what he did.  The right thing.  How often do you see someone screw up so gigantically in such a key moment and then actually admit they were wrong?  And actually mean it?  This isn't like the apologies from the PED users, the ones that felt forced and not contrite.  This isn't like when your mom forced you to apologize for hitting your sister.  You knew what you did.  You weren't sorry.  This is a man recognizing that he made the biggest mistake in his life and going out of his way to do whatever he could to make things right.  Does admitting he blew it to the world turn back the clock?  No.  But if you were in his shoes could you have gone up to the man whose only chance at being in the Hall of Fame you just robbed, look him in the eyes and apologize profusely?

And now he has to live with it.  The hatred.  The vilification.  But most of all the guilt.  He's Tom Hanks at the end of The Green Mile.  He killed something beautiful, and now he has to live with it.  For the next few weeks (maybe months), the best part of Mr. Joyce's day is going to be the first ten seconds after he wakes up.  That little part of the day where you aren't quite thinking yet and don't feel anything but good.  And then once reality sets back in, he'll remember.  And he'll feel it.  Hopefully he gets past it soon.  Its a shitty way to live.

I would like to thank him though, as weird as that may sound.  When you compound this with all the other weird umpire happenings that have occurred so far this year, change has to be looming on the horizon.  Whether these mean some umpires get the axe (unlikely) or we get some more replay thrown in (more likely), it will be good for the game.  And that helps absolve Jim Joyce even further in my mind.