The good times just keep on rolling on the South Side after another enjoyable Sox victory on this lovely, rainbow-filled July evening.

The 7th victory in a row, to be exact.  Which I realize is not as fancy as 11, but I am still seeing a sponsorship opportunity here...

Gavin Floyd continued the absolute dominance of our pitching staff of late, going 7.2 scoreless innings against the Royals.  His only earned run crossed the plate on a hit given up by Thornton in his brief out's-worth of an appearance.

I think I will find it in my heart to forgive Thornton for this.

And speaking of All-Stars!

In a shocking and pleasant turn of events, Paul Konerko became a late addition to the American League All-Star roster, as selected by the AL team's manager Joe Girardi.  Paulie replaces Justin Morneau, who withdrew due to a concussion that occurred during last Wednesday's game.

This is sweet on several levels; including knowing I won't forever harbor that disappointment of Nick Stupid-Face Swisher winning the spot over Paulie.  I mean, I will.  I will forever be disappointed in humanity for that.  But this makes it ever-so-slightly less painful for all of us.  I can focus my energy back to popped-collars and genocide and stuff.

In other fine news:

- Boom goes the Q!namite! Not once, but twice this game.

- Beckham also sent one out of the park for only his 3rd time this year.

- Paulie hit an RBI double that got Omar Vizquel from 1st to home.  You heard me right.

You see, Vizquel was standing on 1st base, Paulie hit the ball down the left field line, and Vizquel ran from - get this - first base, all the way to home - no, really - home plate - and did so safely.

This moment was brought to you in part by Scott Podsednik.  Pods also gave as a thrill in the first, when he helped Gavin out of an early jam, by getting thrown out on his way to third base after a strike-out. 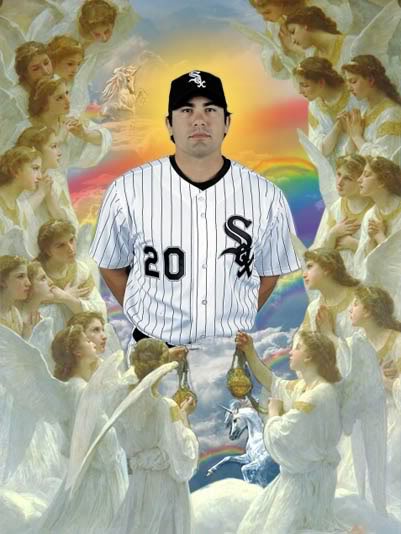 That aside, the day is still relatively young on the West Coast and I was left in charge while Cheat's in the boonies and larry's oh so busy drinking whiskey and meeting the players, the asshole he is, and everyone else is in some suite at the game, I hate you all.   So now that this game is ovah and I've witnessed the latest of winnahs, I am off to catch some of the 70-degree sunset over the Sound.

There are plenty of shiny, fancy, make-you-so-horny stats to throw around and win/loss analyses to be made on how the Sox are currently playing.  I hope to see some in the comments next time I log in.