With the release of John Sickels' White Sox top prospects list last week once again marking the sad state of our farm system, I thought a look at June drafts of years past might be revealing.  There's always plenty of the subjective and qualitative when it comes to assessing prospects, but as usual I'm going to try to make everything as strictly numerical as possible.  It is my way.

For the number crunching I was helped by this Camden Depot post in particular in figuring out what baseline comparison would be reasonable to benchmark Duane Shaffer and Doug Laumann against.  Aforementioned post contained an excellent graph: 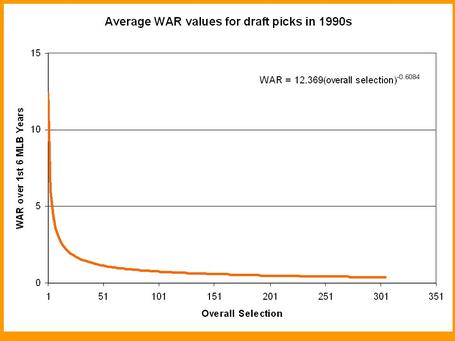 Using the model CD derived, I was able to generate a number for expected wins contributed based on draft order.  Specifically, the equation spits out expected wins for the first 6 years of the draftee's career.  These years are the pre-free agency years when the player costs far less than he would on the open market.  Since it's also very often the case that most players who make the big leagues do not make it out of free agency, neglecting wins obtained past the first six seasons makes all the more sense.  Combining the model with B-R's draft widget, I ended up with a table that compared the Sox drafts to the league average given the White Sox' slots in the draft order.

The who did what: Shaffer controlled the draft from '91 through 2000 and was again named to that position in 2003 supplanting Doug Laumann, the guy who's been running the show since '08.  Obviously, the most recent drafts are going to be understated as they picked kids who have much of their careers yet to play, so the total difference between actual production and expected will very likely be less than the gap shown.   I also subtracted Cameron's* and Buehrle's production past their first 6 seasons, though no one else because I figured it wouldn't much matter.

Those two are by far the best picks over this span and they underline the reliance on the late-rounds that the list of the best makes clear. An informed guess says that the difference between the production of actual Sox picks and the average amounts to about the same value as an additional top 10 pick every year.  Though given the 20 year track record with top picks it might not have made much difference.  I.e. Sox' wins versus expected for the first 5 rounds from 1991 to 2007:

They've obviously struggled, but at least there is a lot to like about the most recent drafts and they somewhat reverse a number of bad trends for the Sox in the draft.  For one, there's a better balance between hitters and pitchers that wasn't present from '91-'07.  Pitching prospects yield worse returns all else equal and the Sox have spent too many high picks on pitchers in years past.  With the hitter-oriented '08 and '09, I'm willing to give '10 a pass, especially since Chris Sale is already in the majors.

Combined with Hudson, Beckham, Morel, and Mitchell it's not too hard to chart a course that sees Sox draftees attaining expected production for 3 collective drafts, something they haven't pulled off since Cameron was selected.  Achieving competence would be a nice reversal indeed.  And from there we can hope to expect overslot deals approved at long last by JR, the return of legitimate Latin signees and a final end to the constant dealing of our best prospects for role players that should have been developed on the cheap years ago.

And for kicks, here's a table of best draft picks.

*I like thinking about the alternate universe of White Sox history wherein Ron Schueler does not trade Mike Cameron for Paul Konerko.  It's hard to imagine the last decade without Paulie...but he's clearly not the player Cameron is.