The roster is virtually finished. The 5th starter spot maybe undefined, but I want to talk about the thump thump. Let's turn our thoughts to batting order.

We know Pierre and Morel will bookend the lineup. It's the in-between that is a bit unknown. I think it makes the most sense to bat

I was against Rios in the 3 slot to start 2010, but he balanced his speed and power quite well and I'm loathe to move him now. By bumping Q down, you are able to lessen some of the external pressure on him and perhaps help him relax a bit. Qs are a powerful but cantankerous race and you never know what may upset them. 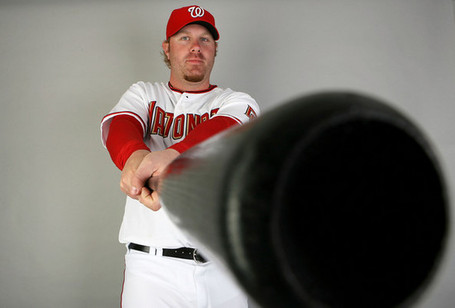 "I can help with your scoring problems."

Of course, you could swap Beckham with Ramirez. You would see if Beck's hand has healed (no reason to think it hasn't) and allow him to get over the disaster that was the first half / the disappointment that was September. You'd look like

which would move Q up a slot and put two bad bunters up top. Whatever our feelings toward bunts, the Ozzie bunts. It may be stupid, it may be brilliant, but it's what the manager of this team does. I'd rather not see this particular order, but it could happen.

If there was great intent to shake up the lineup, then you could go with

Again, we know going into 2011 there is going to be regression from Konerko, but it's an acceptable amount and will be offset by the huge boost at DH. Beckham will stablize to be more like the '09 guy we all fell in love with, AJ is AJ and Pierre is Pierre. Rolling the dice on a slightly more even Q and crossing your fingers for some of the pop Morel showed in September, this could be one of the better lineups in the AL. Where do you bat them? (and don't say, "At U.S. Cellular").