Share All sharing options for: Thunderstruck: Looking at the AL Central Designated Hitters

February is fast approaching, meaning most teams are finishing up their offseason moves.  Other than non-roster invites and minor position battles, managers have already figured out who will be their starters at almost every position.  This is very true in the AL Central, especially when it comes to the designated hitters.  Four of the teams look to employ one main DH (Chicago, Cleveland, Detroit and Kansas City), while the Minnesota Twins appear to be content using a bizarre platoon.

In theory, being able to trot out a DH should be quite the boon to a team's offense.  Last season was proof that nothing can truly be taken for granted in MLB.  Not only did the White Sox receive the least amount of production from their DHs out of all fourteen teams in the AL, they were the only team in the AL Central that actually suffered a negative contribution from what should be the easiest spot on a team's roster to fill.  The hated Minnesota Twins enjoyed a 4.4 WAR boost above the White Sox solely from their DHs, thanks in large part to former South Sider Jim Thome's 3.6 WAR season.  Kenny Williams mercifully put an end the the DHydra this winter by signing Adam Dunn.

A key part to winning your division is not allowing massive talent gaps to arise between your team and the other main contenders.  How much has the gap closed now that the Big Donkey has arrived at U.S. Cellular Field?  First, we need to look at his contemporaries in the division.

Using each team's depth chart as a reference point (along with articles from their SBN sites) have resulted in a fairly unsurprising list of names.  The Indians plan on sending Travis Hafner out again, seeing as they owe him $26MM over the next two seasons.  The Royals will be using the newly extended Billy Butler.  Victor Martinez is slated to receive the lion's share of PA at DH for the Tigers.  Most importantly, the Twins seem content using Jason Kubel and Jim Thome in some sort of platoon, despite the two hitters being left-handed.  Let's start by looking at the men in the cellar. 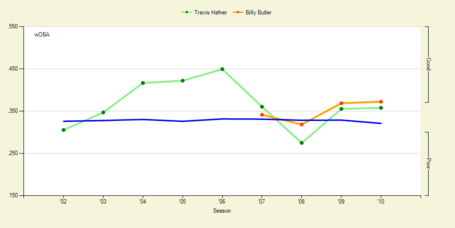 Cleveland: Travis Hafner will never be the terrifying monster he was from 2004-2006 again, but he's been quietly decent the past two seasons.  His ISO and BB% have both dropped off, presenting a nice chicken and egg argument about which may have caused the other.  He's still good for an above-average OBP and a SLG around .450.  He hits righties better than lefties, but doesn't exactly struggle against southpaws (.938 OPS vs. .824).  The only problem is he cannot stay healthy.  He hasn't played more than 118 games since 2007, and at 32 years old his best days are behind him.  He absolutely owns fastballs, but struggles slightly with sliders and cutters.  He has almost no chance of being worth the $13MM he is set to make this season.

Kansas City: Billy Butler is the youngest of the division's DHs, coming in five years away from his 30th birthday.  The Royals recently extended him, keeping him under team control through the 2014 season.  He might just get to be in the City of Fountains when they field a competitive team again.  Butler has been moved off of first base not only because his defense was lackluster, but because uber-prospect Eric Hosmer is on the fast track to the majors.  Billy is the only true righty of the bunch.  Butler's BB% has been steadily increasing each season, allowing him to realistically post OBPs around .380 for at least the near future.  His power on the other hand seems to be topping out at around 25 homeruns with 40+ doubles.  He is Paul Konerko slow.  His value drops only slightly by becoming a DH, and if cost is concerned he is the best value at the position for the price. 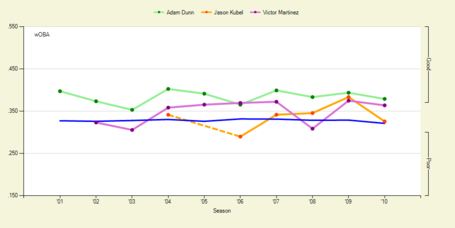 Detroit: It appears we only got to enjoy one full season without Victor Martinez in the AL Central.  V-Mart is the only switch-hitter in the group.  He will be spending some time behind the dish and at first base, but will see the majority of his days as the new DH for the Tigers.  This will have a tremendous effect on his value.  His bat has always been great for a catcher, but isn't nearly as impressive when his only job is hitting.  Victor's OPS will be similar to Butler's, but with a higher SLG and lower OBP.  His advantage over Hafner and Butler is his ability to somewhat capably play two additional positions.  DHing should keep him healthy for the whole season as well.  Expect his numbers to suffer a slight decline as he moves from Fenway to Comerica.

Minnesota: Jason Kubel regressed heavily last season in his time split at DH and RF.  Realistically, he should never wear a glove.  His career UZR in the OF speaks for itself (-18.4).  He spent so much time in the field last year because the Justin Morneau injury necessitated more Jim Thome, allowing the Gentleman Masher to break our hearts.  Kubel's 2009 season may be his version of Carlos Quentin's 2008.  He is not a better hitter than Jim Thome, even at this point in Thome's career.  He just isn't nearly as fragile.  He'll get the majority of the time at DH because Gardenhire will keep sending Delmon Young out the butcher balls in left field.  Kubel is a lesser, younger Thome.  It's kind of sad that he'll get more PA, but whatever.  Gardy owes us for our abomination of a platoon last season.

Chicago: Adam Dunn will have the best power numbers of the group by far.  That isn't even a question at this point.  He is the only one of the group that will pass the 30 homer plateau, much less come close to 40.  His OBP should also be up near the top with only Butler presenting a legitimate challenge in that department.  It may have cost 4/$56MM, but the White Sox easily have the best DH in the division a mere year after having one of the worst DH situations in recent memory.

Breakdown: Lacking any production at DH may have cost the White Sox the division last season.  That won't happen again this year.  If I had to rank each team's situation, I would have to say that Chicago comes out on top with Adam Dunn, followed closely by Kansas City with Billy Butler.  Victor Martinez is right behind those two, followed by the Kubel/Thome platoon and Travis Hafner/whoever has to step in when he eventually gets hurt.