Share All sharing options for: White Sox notes from The Bill James Handbook 2011 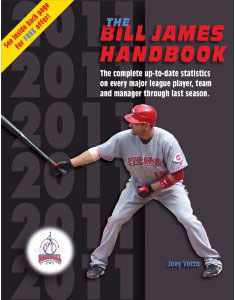 Carrying an annual tradition from Sox Machine on over to the new digs, it's about time I thumb through the new Bill James Handbook and relay a few of the Sox-related items found along the way. It's a month later than usual, but the Sox had to go ahead and sign Adam Dunn and Paul Konerko and Jesse Crain. Blame them.

But before I do, I'd like to remind you to cast your ballot for the SSS Hall of Fame voting, if you haven't already. It's simple, it's easy, it's good and good for you.

25) The major league leader in baserunning outs, combining "Out Advancing" and "Doubled Off," was Vladimir Guerrero, with 12. During the playoffs Ron Washington told reporters that Vladimir was perhaps the best baserunner on his team, which ... you know, it's nice of him to say that. But Guerrero is a terrible baserunner at this point, regardless of what his manager may tell you and gullible TV announcers may repeat.

Sound familiar? A.J. Pierzynski, by the way, tied his Sox-worst performance on the basepaths with 20 bases lost.

At the same time, this was the first year since joining the Sox that Pierzynski failed to finish in the top 10 in first-pitch swing percentage. Carlos Quentin did -- No. 10 at 33.3 percent.