Another Hall of Fame election has come and gone, and still no more White Sox have been given the Han Solo treatment.  It has been fourteen years since the last HoF class had a Pale Hoser in it, with Nellie Fox being the most recent inductee.  This isn't even the longest drought for the team though, as no player was inducted from 1965-1983 (Luke Appling/Red Faber and Luis Aparicio bookend the streak).  This got me to thinking about which teams have the longest dry spells, both historically and actively.

I chose to only credit a team with a HoFer if the player went in wearing the team's cap, though transplanted teams count (think the Washington Senators becoming the Minnesota Twins).  Those teams unfortunate enough to not have any Hall of Famers are excluded from this exercise.  While there is no player in sight for teams like the Florida Marlins, the Tampa Bay Rays, and the Los Angeles Angels, the others in the group should be joining the rest of the teams represented in Cooperstown soon enough.  The Seattle Mariners (Edgar Martinez? Ken Griffey Jr), Houston Astros (Jeff Bagwell, Craig Biggio), Arizona Diamondbacks (Randy Johnson), and Colorado Rockies (Larry Walker? Todd Helton?) should all be bellying up to the big kid's table in the next ten years.  I also left out managers, mostly because they're managers and I care far less about them than players. 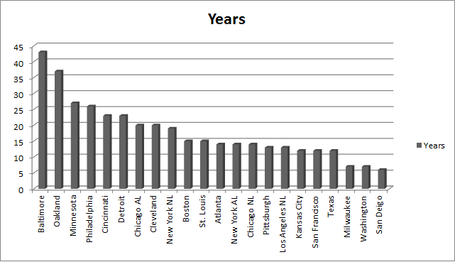 How about that for some disparity?  Would anyone have guessed (without looking at a list of members) that Baltimore would have the longest gap and San Diego the shortest?  The average waiting period has been 17.81 years.  This leaves eight teams on the wrong side of the average, helped in great part by the fact that no one worth a damn played for St. Louis/Baltimore between George Sisler and Frank Robinson.  The other player to player gaps are as follow:

*Toronto and Minnesota are excluded since they just had two players elected.

Once again, the White Sox find themselves on the short end of the stick.  The average waiting period in this instance is 9.38 years.  The last player elected for each franchise is as follows:

And seeing as Harold Baines was just eliminated, expect the White Sox streak to continue until the BBWAA deems it fit to immortalize Frank Thomas.  And if Jeff Bagwell and Tim Raines aren't in the HoF by then, things need to be fixed promptly.