The Kenny Williams (and Don Cooper and Herm Schneider) Decade

Share All sharing options for: The Kenny Williams (and Don Cooper and Herm Schneider) Decade

Back in August, I ranted that Kenny Williams has on average been failing to acquire assets at below-market prices and that in part was responsible for the utter failure of 2011.  And while I think we can all agree that's been true lately, a rant is not exactly the measured quantitative approach that in general I prefer.  So let's remedy that.

Tango ran a pretty neat post last Thursday that looked at the Moneyball (2002-2011) era.  The point was to identify the relationship over the course of the defined era of dollars spent on payroll to wins.  In case you weren't sure that money matters in baseball, it turns out that there is a very significant correlation between the two (r=.7): 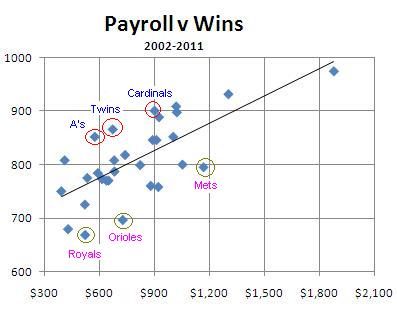 Big surprise who ended up where, right?  But I don't see the White Sox anywhere.  And while what I should have done was ask Tango for his data so I could just plug and chug, I went to baseball-reference and pulled my own figures and ran roughly the same data to produce a similar graph.  I included 2001 and I took out 2011 because the payroll data for the most recent season wasn't updated when I checked.  I also put everything in terms of 2010 dollars.  The end result was basically the same graph, but a teensy bit smaller correlation.  So hooray, that checks out.

What I really wanted was the equation for the trend line.  That equation gives you the expected wins given your team's salary levels.  As in the Tango graph, the teams above the trend have found value in excess of the money they spent.  And the ones below suck oh so very hard.  Pretty straight forward way to judge a GM, right?  Sure there are caveats, but over the course of a decade it's a very reasonable metric.  So how have teams done over the KW Era?

He's been worth +30 or so wins over the course of his career (that's good!), but -10 since 2006 (that's bad!).  And as I've mentioned numerous times, the Sox' primary competitive advantages are Herm and Coop.  How much credit do you want to give Kenny for not canning them?  Coop was promoted on Kenny's watch in 2002, but he's been with the Sox since 1988.  Between the two of them, I think they'd be in the neighborhood of 3-5 free wins.  It's hard to quantify precisely, but I think that's a good ballpark and I've used about that in the past.  Kenny's been about 3 wins above average for his career.  If he's an above average GM, it's probably not by much.  And he might not even be that.

Like I suggested in my rant, KW needs to get back to what he was doing early in his career, which largely centered around capitalizing on his competitive advantages and avoiding giant contracts.  He's done the opposite and they've basically crippled the team.  Now he's back in what has always seemed to be his comfort zone.  KW with his back against the wall managed to obtain John Danks, Carlos Quentin, Jim Thome, and Gavin Floyd without hurting the team or the bottom line.  KW given free reign resulted in two Nick Swisher trades, the pain of Scott Linebrink, and the waiver/free agent signings of Alex Rios and Adam Dunn.  You might also say that the Chairman has put Don Cooper and Herm Schneider back in charge.  And why not?  Their results are hard to argue with.