Loss of Buehrle, loss of confidence

Share All sharing options for: Loss of Buehrle, loss of confidence

With Mark Buehrle out of the picture, it's going to be fascinating to see how the White Sox attempt to market themselves come SoxFest, because their biggest problem is now a bigger one.

Plainly put, Mark Buehrle was their go-to guy for feel-good Sox moments, and Kenny Williams couldn't fit him in the budget because he's throwing $40 million a year at three players who offend the senses.

Buehrle is gone. Alex Rios, Adam Dunn and Jake Peavy remain. It's hard to make that look desirable in brochures.

It's not even about production at this point. I'm talking about players who inspire confidence. They are related, but not entirely.

The Sox haven't been that terrible of team the last few years. I can think of several teams who would kill for a .500 record. Their problem is that they make baseball look incredibly difficult -- in past years, their commercials advertised just how well they made a game look like work -- and losing Buehrle doesn't help matters one bit.

Basically, when Buehrle took the mound, he marked his territory. If you were to map it out, it would look like this: 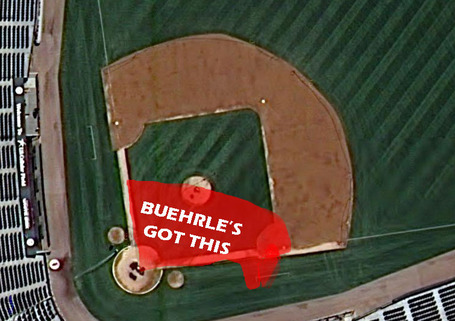 It's fun to watch a guy who knows what he's doing, and Buehrle always projected that sense of control. He threw strikes and pushed the pace. He used his hands and feet to defend the box. And whenever he allowed baserunners, he more or less tethered them to the bag.

That's why his between-the-legs flip stands out. He kicked the ball as it tried getting past him, and then he chased the damn thing down into foul ground. He defended his position in every sense of the word. With Buehrle, you had to come and get it from him.

Sure, sometimes that happened. He suffered the occasional stomping, but it seldom looked like it got to him. Stare blankly at the home run's landing spot, kick the mud out of the spikes, mop the brow, get another ball and go back at it. And when that didn't work and he just plain sucked, at least he had the decency to make it quick.

Buehrle often times looked better in defeat than other Sox pitchers look in victory. Jake Peavy hops off the mound cursing at himself and stomping in a circle . John Danks will get into an extended at-bat, snap his glove when he gets the throw and chomp on his gum mercilessly. I guess that's what gets them the "bulldog" title, but when you place them in the context of the White Sox's 25-man roster, they're just two more guys who make things look way more difficult than they should be. It just comes off as gritty, somehow.

Up and down the roster, the Sox fight the game. Like when Alex Rios and Juan Pierre pull up on pop-ups in the Bermuda Triangle. When A.J. Pierzynski slams is bat running down the first base line. When Gordon Beckham jumps out of his shoes at a fastball up and away. When Alexei Ramirez topples over backwards on throws to second.

Ozzie Guillen fell into it, too, with his overmanaging. No AL team resorted to the bunt more than the Sox did, even though Guillen didn't really have the personnel to do it, because one run required sacrifice. You can't get more melodramatic than that.

How the hell did it end up that Hawk Harrelson became justifiably nervous when the Sox have a runner on third and nobody out? How did the Wild Pitch Offense serve as both a punch line and Plan B?

Sox fans looked forward to Buehrle Days because he raised the competency level. With him out of the picture, the Sox are short on rocks.

The good news is that the Sox aren't devoid of assertive presences. The problem is that Paul Konerko is the only one with a regular role. When he comes to the plate, he looks locked in and ready. Throw him a fastball, and he's going to destroy it. But flip him a slider, and he might flip it to right field. He inspires trust that he will react accordingly.

But when I think of the other guys who bring a similar sense of order to the proceedings, they're on the outskirts of the roster:

Three of these players will receive expanded roles for the first time in their careers. This could be a good thing, because they qualify as "new blood" for an organization whose veterans have been extremely comfortable. But people aren't going to buy in before they prove themselves, and if they fall short, the focus doesn't just shift to Dunn and Rios, but also to the man who isn't there.

Good luck selling that before the games even start.