Just think, by the time you're reading this feature next week, Mark Buehrle and the rest of the gang will be running around in beautiful and scenic Glendale, Arizona.  The season is creeping up fast.  Over the past two weeks I have looked at the traditional power positions in the division, first base and designated hitter.  Today we continue our journey North on the map that is the defensive spectrum by heading out to left field.

There is an odd mix of players out in left field in the AL Central this season.  You have your seasoned veteran in Juan Pierre, two former top prospects trying to prove they're still worth a damn in Delmon Young and Alex Gordon, a soon-to-be 30 year old finally getting a real chance in Ryan Raburn, and a young speedster trying to stay in the majors on an awful team in Michael Brantley.  Quite the tallest midget competition we have going on this summer.  So which players have the best odds of standing tall above the rest of the chaff? 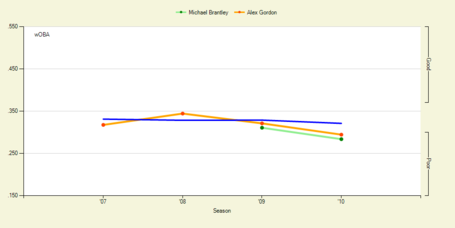 Cleveland: Michael Brantley was another piece of the underwhelming return that the Indians received from Milwaukee for CC Sabathia.  Brantley is a natural center fielder, but is stuck playing in left because of Grady Sizemore.  This makes his poor defense in left seem strange, though it could be explained by a small sample size or learning the new position.  I don't expect him to give up almost a full win on defense again this season.  He has no power to speak of, only once managing to have an ISO above .100 in the minors.  He is fast and a very good thief on the base paths.  If he can show the plate discipline he exhibited in the minors (never posting a BB% under 10.4%) and combine that with at least league average defense, he can be a useful placeholder on a non-contending team like the Indians.

Kansas City: Does anyone not remember the Alex Gordon hype train?  He won the Golden Spikes Award in 2005, was named the best college prospect in the draft, was taken second overall by the Royals, and was supposed to be the next George Brett and lead Kansas City back to the promised land.  But something went wrong.  Just like Matt LaPorta, Gordon has dominated the minors but struggled with big league pitching.  Add in the injuries and the inability to effectively play defense at the hot corner anymore and you have the recipe for a colossal bust.  The hope is that shifting him to left field will make him more comfortable and that his bat will finally come around in his age 27 season.  The projections are looking good, as a few systems have him managing a wOBA over .350.  He could hit 15-10 homeruns, which would could actually be enough to lead this group of players.  I'm in agreement with them and think this is finally the year that Alex puts it all together.  I guess my close proximity to Kauffman Stadium is making me more optimistic towards Royals players.  A quick glance at my rough rankings list for the rest of the positions seems to disagree with this though. 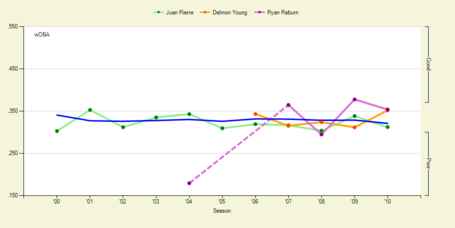 Detroit: I miss last season, when Ryan Raburn was listed as the backup at every position on the depth chart other than shortstop.  For the first time in his career, Raburn had over 300 PA and he took full advantage of it.  In a mere 410 PA, he accumulated 2.1 WAR and is coming into the season as a regular starter for the first time.  He should hit around 20 homeruns, with 25 being his probable peak.  He'll also strike out in just under 25% of his PA while walking in just over 5% of them, so you get that nice mixed bag.  He brings at worst average defense to the position, with at least equal upside on offense as either of the close-to-failed prospects.

Minnesota: I do not, have not, and never will care very much for Delmon Young.  Despite having the lowest BABIP of his career last season, he put up career bests in almost every offensive category.  Expect the strikeouts to tick back up along with the BABIP.  I don't believe in the complete sudden power spike.  Yes, he's getting older and that happens.  I just don't see him fully repeating it.  Put him down in the race for the AL Central Left Fielder Homerun Crown Race with Raburn and Gordon.  He is an absolute butcher in the field.  Seriously, that Minnesota outfield defense is atrocious.  This puts a huge damper on Delmon's actual worth, costing him over a win a year throughout his career.

Chicago: Juan Pierre is the known entity of the group.  You get a middling OBP, next to no power, a boatload of stolen bases at a good clip, and pretty good defense in a corner spot.  Could you do better?  Yes.  But the White Sox are going to get their $5MM worth, so it really doesn't matter.  Expect a slight uptick in power and probably a few less stolen bases.

Conclusions: This group wasn't nearly as easy to rank as the past two.  Ultimately, I decided to give Ryan Raburn the top spot based on potential.  I think he's going to have a pretty good year finally being allowed to start.  Stranger yet, Alex Gordon comes in second.  This is another batting potential pick.  Juan Pierre comes in third on the strength of his OBP and stellar defense.  Delmon Young comes in fourth despite his bat being at least the equal to Raburn's and Gordon's.  His defense is that bad.  Michael Brantley pulls up in last, continuing the Indians trend in these pre-season positional power rankings.  For those keeping score at home: Detroit is on top currently with 5 points, Chicago has 7, Kansas City has 8, Minnesota has 10, and Cleveland has 15.  Next week we'll look at how Carlos Quentin stands up against the other right fielders.